Convicted Leicester Tobacco Smuggler handcuffed and on his way to jail 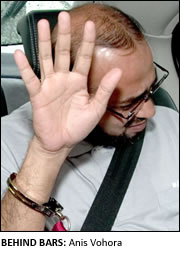 THIS is convicted tobacco smuggler Anis Vohora, handcuffed and led away from Heathrow Airport where he was arrested after being on the run for three years.
Vohora, 41, fled the UK in 2007 to France and then on to India just weeks before he was due to stand trial for his part in one of the biggest ever cigarette smuggling operations in the country.
Vohora, and co-defendant Mohmed Safi Patel were found guilty of smuggling 27 million smuggled cigarettes and four tonnes of hand rolling tobacco into the country.
The revenue loss to the nation was around £4 million.
Vohora was jailed for four years in his absence but was dramatically arrested in America two months ago by US Marshalls when he went to visit his sister in Chicago.
He was finally extradited and arrested by police at Heathrow Airport.
At Leicester Crown Court he was told he would serve his four year sentence, and an additional three months for bail offences.
“This is an outstanding example of co-operation between HMRC and the US Marshalls. Vohara attempted to steal from public funds then fled the country when he was found out and brought to account for his part in the crime.”