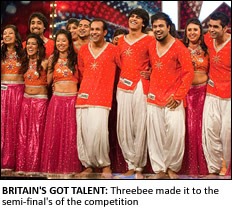 BRILLIANT Bollywood dance troupe Threebee are riding on the success of their appearances on ITV’S hit TV show, Britain’s Got Talent.
The 16 strong dance troupe have found themselves spinning to dizzying heights, after impressing the judges and audiences with energetic performances of AR Rahman’s ‘Jai Ho’ at the auditions to a show stopping routine to Bally Sagoo’s ‘Stayin’ Alive Desified.’
As the only Bollywood dance company to have reached the live semi-final stage of Britain’s Got Talent since the show started four years ago, Threebee have rapidly attracted a storm of interest from Bollywood lovers across the nation.
Behind the scenes, the talented founder and choreographer of Threebee, Shweta Aggarwal, has worked with the likes of Strictly Come Dancing sensation Laila Rouass and Eastenders star Preeya Kalidas.
The 32 year-old described the prospect of being slammed in front of the nation by ‘Mr Nasty’ Simon Cowell as extremely nerve-wracking.
“I think for the semi finals the nerves really kicked in and we were self-conscious at first. With Simon Cowell you don’t know whether you’re going to be on the right side of him or not. As bad as people make him out to be, I actually admire his honesty. I love the fact that he cuts to the chase and he’s not there to humour people – he’s there to tell the truth.”
Threebee inform us their stint on Britian’s Got Talent is just the beginning. The group will treat fans to one-off performances across the country this summer as mela season gets underway.