How Birmingham grandfather cut the booze and Paratha to beat diabetes 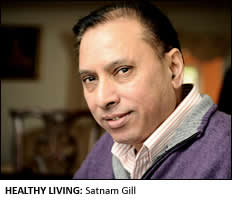 WALKING a few miles every day and cutting out regular trips to the pub was a small price to pay for Satnam Gill when he was told he had Type 2 diabetes.
Like many people of South-Asian descent, Satnam had been unaware he was in an ethnic group for whom the risk of Type 2 diabetes is four to five times higher than it is for people with European family origins.
But thanks to determination, good health advice and an education programme specially tailored for the cultural and language needs of South Asian communities, Satnam made small changes to his daily routine and diet that have paid big dividends for his continuing health.
Doctors believe that the main reason for high diabetes rates among people of Asian descent is genetic but that the problem is exacerbated by a high fat diet, a relative lack of exercise and generally low awareness of the increased risk.
Like many sufferers, Satnam was unaware that he had diabetes. It was only after the 61-year-old received a letter from his GP practice a couple of years ago that he took the steps that led to a diagnosis.
“The letter explained that Asian people are more prone to diabetes than others and invited me to the health centre for a check-up,” said the father-of-three and grandfather-of-six, who lives in Moseley.
“It had never occurred to me that I might have diabetes – I just didn’t know enough about it to be concerned. It was one of those things where you just think ‘it’ll never happen to me’.
“But I thought I had nothing to lose by going for the check-up so I went along. It was quite a surprise when the nurse told me I had Type 2 diabetes.”
Like many people who discover later in life that they have diabetes, Satnam realised there had been signs which he had not realised were symptoms of the condition.
“I have suffered from blurred vision for a number of years – especially in very bright light. But I didn’t have any idea that it was a symptom of diabetes.
“That’s why education is so important – giving Asian people the chance to find out what the signs of diabetes are and what they can do to reduce the health risks.”
Satnam was determined to do whatever he could to change his lifestyle so that he could cope independently with the condition.
He immediately began to walk three or four miles a day, quickly losing around five kg. He cut out regular trips to the pub and tots of whisky at home. And he was disciplined about changing his diet, reducing the fat content of his traditional Asian meals and cutting out butter-heavy favourites like parotas.
And Satnam attended two diabetes education sessions that had been specially set up for Asian people who were newly-diagnosed with Type 2 diabetes. Delivered for the community’s convenience at Hall Green Health, a translator was on hand to make sure that participants for whom English was not their first language were able to fully understand.
The sessions tailor the successful DESMOND (Diabetes Education and Self-Management for Ongoing and Newly Diagnosed) programme and are available in English with key instructions translated into Urdu, Bengali, Gujarati and Punjabi.
“I found it very useful, especially the advice about diet,” says Satnam.
“I wish I had known a lot of what I’ve learnt much earlier because the changes I’ve made to my diet have not been a problem for me.
“I used to have two sugars in tea, now I have none. I used to like a beer and a whisky but I’ve cut out alcohol almost completely and don’t really miss it. And my wife has found ways to reduce the fat content of our meals and they still taste just as good.
“I’m very grateful for all the support I’ve received and it’s excellent that the advice is being made available in the community – even in gurdwaras, mosques and other places of worship where many people meet and discuss things.
“I just wish that I’d found out what I know about diabetes now many years earlier.”
The South Asian community DESMOND programme is run by South Birmingham Community Health. Diabetes nurse Elaine Boylan, said: “We take great care to deliver services that are accessible and responsive to the needs of all the communities we serve.
“People of South Asian descent are considerably more likely to develop Type 2 diabetes than other demographic groups and so we are very pleased to offer this education programme that is tailored for the needs of those communities.
“The initial diagnosis of diabetes can be quite a daunting moment. But with the right education and support, most people find it quite manageable as part of their daily routine. That’s what this programme aims to help people achieve.”
Anyone of South Asian descent who is registered with a South Birmingham GP and would like to participate in this DESMOND programme or would like more information about it, should call the South Birmingham Community Health diabetes team on 0121 442 3527 or ask their GP for a referral.