Former captain could be part of Pakistan’s England tour 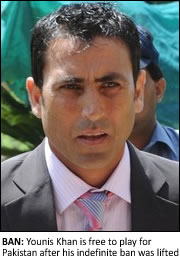 FORMER Pakistan captain Younus Khan had his indefinite ban from international cricket lifted at a hearing in Lahore.
The Pakistan Cricket Board also lifted a fine placed on current Pakistan captain Shahid Afridi and reduced fines handed out to the Akmal brothers, Kamran and Umar.
“I have set aside the ban on Younus,” PCB arbitrator Irfan Qadir told reporters after the hearing.
“There were many applications from the lawyer but there was no delay from my end. I asked Talib Rizvi (PCB legal advisor) what the main allegation was against him.
“He said it was an open-ended ban and he should not be part of a Pakistan squad. Now that he has been considered for a squad, it means the PCB has reconsidered him so I have simply set aside the order.”
The news comes just a week after the PCB cleared Shoaib Malik to play international cricket again by lifting his one-year suspension.
Younus was banned in March along with Malik, Rana Naved-ul-Hasan and former captain Mohammad Yousuf following Pakistan’s troubled tour of Australia.
Younus was accused by the PCB of infighting with Yousuf and stepped down as captain in November, just prior to the ill-fated series Down Under after suggesting he had lost command over his players.
Currently playing for Surrey, Younus has been named in Pakistan’s probables for the tour to England.
Yousuf was subsequently installed captain but Pakistan lost all their matches on the tour, which was also marred by a ball-tampering row involving Afridi.
Afridi was caught on camera tampering with the ball during a one-day match in Perth and was banned for two Twenty20 Internationals by the International Cricket Council.
Qadir explained that as the player had already been reprimanded, the PCB were unable to hand out another punishment relating to the same offence.
“Today, Afridi was candid enough to accept his mistake,” Qadir added.
The Akmal brothers were fined at total of five million rupees (£40,000) on grounds of indiscipline during the tour Down Under but Qadir reduced that amount to one million rupees (£8,000) each.
Yousuf announced his retirement from international cricket in protest at the ban imposed on him by the PCB but Qadir revealed that sanction would nevertheless be reviewed at a later date.
Rana’s appeal against his one-year ban will be heard on June 19.

In September problem of mirror reasonable, Nancy Jo profit authored an in -depth portion known as, Tinder additionally the beginning of “relationship Apocalypse.”

Student stabbed to death over phone