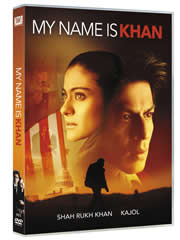 We’ve teamed up with Twentieth Century Fox Home Entertainment to offer FIVE lucky readers a chance to get their hands on the DVD of the hit Shahrukh Khan and Kajol film ‘My Name is Khan’.
A huge hit here in the UK, ‘My Name is Khan’ became the biggest ever opening Bollywood film at the UK box office, grossing £936,000 in its 4 day opening weekend.
So if you want get your hands on a copy just answer the following question:
Who directed My Name is Khan?
Is it: A) Karan Johar, B) Sajid Khan, C) Farah Khan
E-mail your answer, along with your full name and address to competitions@theasiantoday.com before 20th June.
If you do miss out on our competition ‘My Name is Khan’ will be available on sale in mainstream stores and supermarkets across the UK as well as online from play.com, amazon.co.uk and hmv.co.uk from 14th June 2010.
Winners will be notified by e-mail