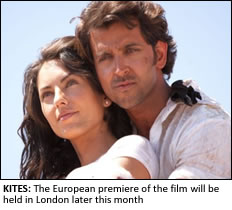 BOLLYWOOD stars Hrithik Roshan and Barbara Mori will attend the European premiere of their forthcoming film ‘Kites’ in London this month.
The duo will grace the red carpet at Odeon West End, Leicester Square on May 18 alongside director Anurag Basu, Hrithik‘s dad and producer Rakesh Roshan, music director Rajesh Roshan and a host of international A-list celebrities and VIP’s.
The film, which is being widely tipped as Bollywood’s biggest blockbuster of the year, centres around two immigrants – one from India and one from Mexico – both navigating life in North America in pursuit of their dreams.
The film marks the first time Hrithik and Mexican actress Barbara have shared screen space.
Bollywood star Hrithik said he made his co-star watch a selection of his films before they began filming.
“When Dad approached Barbara for Kites and told her I will be her co-actor she logged on the internet and saw some of my rubbish videos on YouTube and she was not very excited,” he said.
So when Hrithik and Barbara met before the shooting of ‘Kites’, he gave her three DVDs of his films to watch – ‘Koi Mil Gaya’, ‘Lakshya’ and ‘Dhoom 2’.
“When she met me I made sure to show her some of my strong work to let her know I can really do good performances,” Hrithik said. “I made sure that she saw all the DVDs because she didn’t have a clear picture about Indian Cinema and I also wanted to create the right impression of myself.”
So what was Barbara’s reaction after watching the films? “Not only was she, but everyone who saw these three films, was very impressed. They were very excited and full of compliments for me so I was delighted,” exclaims Hrithik.
‘Kites’ will be released across the UK by Reliance BIG Pictures on 21st May 2010.