Wait is over for controversial film ‘Triads, Yardies and Onion Bhajees’ 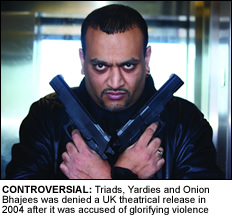 A BRITISH-Asian gangster film stripped of a theatrical release after it was accused of glorifying violence has finally secured a DVD release – six years after it was made.
The award-winning film, ‘Triads, Yardies and Onion Bhajees’, broke new ground in 2004 as the firstfilm entirely shot on a camcorder to get a UK theatrical release.
The film cost just £1,000 to make while those who starred in the film waived their fees.
But just weeks before it was due for its national release Southall Police and Piara Khabra – the then Labour MP for Ealing & Southall – hit out at the films director Sarjit Bains, accusing him of glorifying gang violence.
Following widespread criticism the film, which tells the story of the Southall-based Holy Smokes gang and a £6m robbery at Heathrow Airport, was sensationally denied a mainstream theatrical release.
Instead arthouse and independent cinemas throughout the UK picked up the film for screening; defying calls for the film to banned from all cinematic outlets.
Now, six years after Bains watched his film denied a place in movie history, he is “relieved” ‘Triads, Yardies and Onion Bhajees, is finally getting its release.
“I am just relieved that six years after an elected Member of Parliament and the police scuppered our chance of a mainstream release that the film will finally be available to view by a wider audience,” he said.
“There are so many violent films out there so why they chose to call for my film to be banned is a total mystery. I think Khabra was trying to appease the so-called Asian community elders who for the most part are unelected themselves. This film is just entertainment with the Asian gang in the film named after a real-life Asian gang (The Holy Smokes) that no longer exist.”
Despite its mainstream theatrical no-show, the film did screen at over ten independent cinemas across the UK – winning a number of awards on the way.
At the National Museum of Film and Television in Bradford it scooped the Best Picture prize at the Bite The Mango Film Festival.
Actor Manish Patel, writer and main lead in the film, said treatment of the film in 2004 was “scandalous”.
“This film was denied a mainstream release and that is scandalous. It was made for less than £1,000 and puts many big budget studios to shame,” he said.
“We should be celebrating British films not trying to ban them. Politicians should keep out of film making and stick to fiddling expenses.”
Triads, Yardies and Onion Bhajees will be available in the UK and Ireland from 20 April 2010 from Asda and HMV.