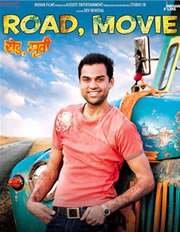 Nephew of Dharmendra and cousin to Sunny and Bobby, Abhay Deol might hail from the film fraternity, but that does not mean you will catch this Deol running around the trees or playing the action hero.
With acclaimed performances in Oye Lucky! Lucky Oye! and Dev D, which has just bagged a cutch of Filmfare awards, taking the road less travelled has made all the difference for the poster boy of offbeat film. Steven Baker caught up with the darling of the independent Indian cinema movement as he prepares for his eighth release Road, Movie.
Abhay, you have now completed five years in the industry, was it a conscious choice from the outset to do off beat or indie films?
Being exposed to cinema from around the world I always wanted to do stuff which is considered in Bollywood as offbeat. I’ve always looked for content and the song and dance thing was something I was not going to do for very long, though I conformed to the commercial norms for my first two or three films. Even though my first film Socha Na Tha was a flop on paper it was a huge hit in the DVD circuit and on satellite. I did the typical Bollywood film because I felt I had to being a newcomer, but given the chance I would have started off with something slightly edgy and original.
You have Dev Benegal’s Road, Movie releasing this month. If the promotional material is anything to go by it looks to be a very stylish film. What is the film about?
In a really short pitch, it’s about a guy driving a truck through the desert which he discovers is actually a moving cinema. In one line that would be the story. Of course there are many layers to the film. It is an adventurous story about a protagonist maturing, who has not really been out there much. He takes upon the responsibility of driving this truck, and we see what happens to him on the way, the kind of people he meets, how they influence him, and what he discovers about himself.
How do you choose a film – is it based on the script, the director or production house?
It is always the script, and from there the director. You work really closely with the director so you have to be on the same wavelength, then the producer, because you want it to be someone who has the money to make it. Over the years I have learnt more about the business and realised the hard way with some of my earlier work that it didn’t get marketed very well, and people didn’t know the film had been made. I have to do my job, the director his, and the producer has to do his work too. It’s a team effort, which has made me understand why a lot of actors sign films because the banner is a big one. It’s like a security blanket for the actors. I didn’t have much of that.
Coming from a film family did you have an insight into how things work before entering the industry?
The job is not glamorous when you are actually working. I’ve seen the way my uncle and my cousins work hours and hours in a day to make a movie. So I won’t be dying to be on magazine covers or giving interviews and all. It is part of the job – it wasn’t part of the attraction. You do have a personal insiders view. But in the beginning it was still difficult to get work.
It seems that social network sites are an essential component to being a star in Hindi cinema. Yet if @abhaydeol is your real Twitter profile, it seems you have posted only one solitary tweet.
One of my friends said you have to do it, you have to do this. So I did post that one post ‘OH no I’m on twitter!’ That was me actually.
So are you tempted to start tweeting regularly like actors such as Shah Rukh Khan?
I wouldn’t know what to say, I’m not good with technology to begin with. I don’t want to start it and get bored after a month or two and drop it. And then what? Once you commit to it you have to follow it through I suppose. If I don’t get into I’ll probably offend less people than if I did and went on to drop it.
Your uncle Dharmendra was given a lifetime achievement award when the IIFA’s were staged in Yorkshire. Flash forward to 2050 do you see yourself having longevity in film and becoming a veteran of the industry?
I hope I last. I hope I survive. As long as I am allowed to grow and learn new things I will stay in the industry. I would walk out if there was no growth or adventure anymore. Longevity is something I would want if I am giving something creative. It is not something I can predict or aim for but will come as a result of the work I do.
Steven Baker is a Hindi film journalist and post graduate in Indian cinema
www.roadmoviethefilm.com