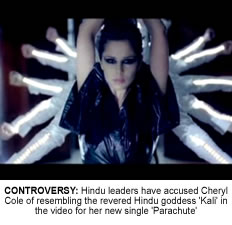 CHERYL Cole may be the nation’s sweetheart but it seems she’s fallen foul of devout Hindu’s.
The singer has been accused of trying to resemble the Hindu goddess Kali in the video for her new single ‘Parachute’.
Religious scholar Rajan Zed has called for “clarification” from Cole, explaining, “The goddess Kali is highly revered in Hinduism and she’s meant to be worshipped in temples, and not to be duplicated in music videos for publicity stunts or thrown around loosely for dramatic effects.”

Zed, who is the president of Universal Society of Hinduism, adds, “This should not be taken lightly. No faith, larger or smaller, should be ridiculed. The inappropriate use of Hinduism concepts and symbols is not OK.

“We welcome entertainers who immerse themselves in Hinduism, but they should take it seriously and respectfully and not just for indecorous showing of Hindu symbols and concepts to advance their selfish agenda. Casual flirting sometimes results in pillaging serious spiritual doctrines and revered symbols and hurting the devotees.”
‘Parachute’ is the third single to be released from Cole’s debut album ‘3 Words’.
It is expected to be released in March.