Bow and Bethnal Green MP on his way back to London 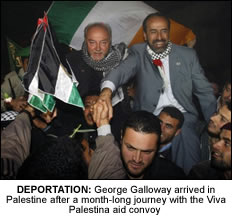 BIRMINGHAM city councillor and leader of the Respect Party Salma Yaqoob has called George Galloway’s deportation from Egypt a “disgrace”.
The Bow and Bethnal Green MP was put on a plane back to London, his supporters said, after he attempted to return to Gaza via the Rafah crossing early Friday after hearing news several members of the The Viva Palestina aid convoy he had been travelling with had been arrested.
His supporters said several Egyptian police officers followed Galloway to the toilet, rest room and a BA lounge before he boarded a plane to London.
Galloway had been with international activists trying to take 200 aid trucks into the blockaded Gaza Strip.
The Viva Palestina convoy has successfully passed into Gaza earlier this week after a month-long trip which saw heavy clashes on the Egypt-Gaza border.
Earlier this week Egyptian police harshly confronted a protest by Viva Palestina activists in the port of El-Arish, leaving some 60 people injured and arresting a number of them.
The scuffle followed Cairo’s refusal to allow aid vehicles to enter the Palestinian Gaza Strip — which has been under a paralyzing Israeli blockade since 2007 — making the convoy take a big detour and delaying its arrival.

Despite restrictions imposed by Egyptian authorities, the convoy finally managed to deliver nearly 200 aid trucks to Gaza after a month-long journey.
Respect Party leader Salma Yaqoob condemned the actions of the Egyptian authorities.
“The decision of the Egyptian government to deport George Galloway MP, and their treatment of those seeking to bring aid to the besieged people of Gaza, is a disgrace,” she said.
“By its obstruction of the Convoy, its brutal assault and tear gassing of its supporters, and now the arrest of Viva Palestina activists and deportation of George Galloway MP, the Egyptian authorities have disgraced themselves in the eyes of the world. Once again they have failed in their humanitarian duty towards their Palestinian neighbours.”