‘It’s a Wonderful Afterlife’ goes to The Sundance Film Festival 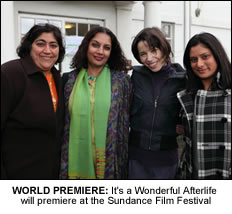 GURINDER Chadha’s forthcoming film will receive its world premiere at the renowned Sundance Film Festival, it has been announced.
The film, ‘It’s a Wonderful Afterlife’, has been added to the original slate of films that were already confirmed for the festival.
It will screen outside of the competition during the festival which will be held in Utah for ten days from 21 January.
“I am delighted to premiere my film at Sundance having had such a long and happy relationship with the festival,” the director said.
“Since it is the festival for independent filmmakers, I feel especially pleased because ‘It’s a Wonderful Afterlife’ is a truly independent British-Indian co-production.”
The film, a supernatural comedy, stars Indian actress Shabana Azmi and British stars Sanjeev Bhaskar and Jimi Mistry.
It follows the story of a frantic Indian mother whose obsession with finding a partner for her overweight daughter takes her into the world of serial murder.
The film is expected to release in cinemas across the UK in April.