Home Features 2009: A Year in Entertainment 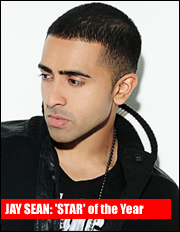 What an eventful 2009 we’ve had in the glamorous world of Bollywood and beyond! From Shah Rukh’s detention in America, to Kylie Minogue getting ‘Chiggy Wiggy’ alongside Akshay Kumar – it was all go in this year. To celebrate the highs, lows, and plain ugly events of the year, we bring you the Desi Massalla 2009 Awards. Find out why Jay Sean gets a nod from the DesiXpress team, how the Slumdog team became ‘Topdogs’ and how Eastenders broke new ground in 2009…
STAR of the Year
WINNER: Jay Sean – Number 1 in the States? Yes, I’ll have a bit of that!
For two years on the trot, one Kamaljeet Singh Jhooti, yes that’s Jay Sean to you and I, has bagged the DesiXpress ‘Star of the Year’ nod. Does he deserve it? Too right he does!
2009 was a remarkable year for the Hounslow boy. Having signed to Cash Money Records towards the end of 2008, the next 12 months would determine whether he had what it took to break into America. He joined forces with Lil’ Wayne on his first single release ‘Down’ and it shot up the Billboard chart, eventually knocking The Black Eyed Peas off top spot to reign supreme as Number 1. Jay became the most successful male UK urban artist in US chart history. And with his album ‘All or Nothing’ doing the business on both sides of the Atlantic, 2010 is sure to be another bumper year for our boy Jay! 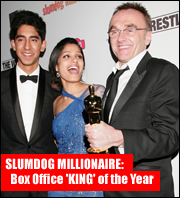 Box Office King of the Year
WINNER: ‘Slum Dog’ to ‘Top dog’ – Danny Boyle creates a masterpiece!
It came, it saw, and boy did it conquer! Slumdog Millionaire – a film that came so close to being released straight to DVD – stunned the film world in 2009. Eight Academy Awards, Seven BAFTA’s, 4 Golden Globes and 94 other worldwide honours made it last years standout movie success. Director Danny Boyle has become more than ‘that bloke who did Trainspotting’, while lead stars Dev Patel and Frieda Pinto have Hollywood in awe. Oh, and that man with the moustache who has acted in over a hundred Bollywood films bagged himself a role on Kiefer Sutherlands hit action drama ‘24’. Not bad Anil, not bad at all!
Bollywood FLOP(S) of the Year
WINNER: In a bad year for Bollywood we share out the award!
In a year that promised so much, loyal Bollywood fans were left scratching their heads and wondering just how it all ended up pear-shaped.
While only a handful of films actually made it to a respectable position on the Box Office chart, a whole load more couldn’t even pay their way onto it. ‘Chandni Chowk To China’, ‘Billu’ and ‘Blue’ were as bad as it got!
Bollywood HIT OF THE YEAR
WINNER: Deep breath folks, its…Ajab Prem Ki Ghazab Kahani
Whoever decided to pair up Ranbir Kapoor and Katrina Kaif in 2009 deserves an Oscar! The duo excelled individually at the box office last year, but it was their joint production ‘Ajab Prem Ki Ghazab Kahani’ which really blew the industry away. After a year of duds, Bollywood was finally treated to a great film! 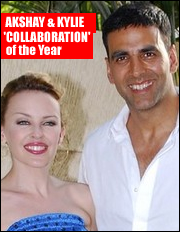 COLLABORATION OF THE YEAR
WINNER: ‘Fair Dinkum’ to Akshay as Kylie & Sylvester get the Bolly Bug!
Just how does he manage to do it eh? In 2008 Akshay Kumar brought us the sight of ‘Mr Cool’ Snoop Dogg in a Turban and Sherwani, but could he better that in 2009? Oh yes, singer Kylie Minogue made a reportedly $1m cameo in the underwater thriller ‘Blue’, while Hollywood stars Sylvester Stallone and Denise Richards got all ‘Bolly Savy’ in ‘Kambakht Ishq’. We can’t wait to see what Akshay has lined up for 2010!
CONTROVERSY OF THE YEAR
WINNER: ‘Don’t Let that Khan pass’ – Shah Rukh gets detained at US Airport!
It’s safe to say Shah Rukh Khan won’t be using his air miles on a trip to the grand old United States of America this year…but If he does, it may be a good idea to change his surname! Our hero, the Badshah of Bollywood couldn’t quite believe his luck when he was detained at Newark Airport in August. No, he wasn’t caught with copied Bollywood DVD’s. Apparently his name triggered alarms bells in America’s tight security system. Held for an hour (shock, horror!), Mr Khan was eventually released but not before his supporters in India took to the streets, and Indian politicians expressed their ‘outrage’ over the incident. Back in India Shah Rukh said he felt victimised because he was a ‘Muslim’…oh, and he denied it was a publicity stunt for his soon to be released film ‘My Name is Khan’ in which he plays a Muslim man, named, umm…Khan, who lives in…ummm…America, who is ummm…detained by the authorities! Hmmmm…we believe you! 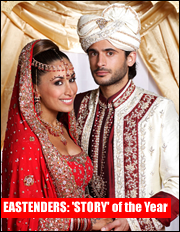 STORY OF THE YEAR
WINNER: OH MY GOD is that a Gay Muslim on the Square?
Yes our very first Gay Muslim character strolled into the Square and boy we were in for some fireworks! Syed Masood, the long lost unreliable son returned to the Masood family and not only brought along a fiancé but some ‘in the closet’ secrets. He fell in love with Amira (his fiancé) and then with Christian (his male neighbour) and then rode on a horse to his wedding! They don’t make ‘Asian families’ like this anymore!
PERFORMANCE OF THE YEAR
WINNER: Big ‘B’ covers new ground in ‘Paa’
Not one to shy away from challenging roles, Amitabh Bachchan broke new ground with his performance in ‘Paa’. Playing the child character Auro who suffers from progeria, Amitabh gave us one of the most shocking, loveable and heart warming performances of the year.
PERFORMER OF THE YEAR
WINNER: Ranbir Kapoor – It’s all in the name!
I guess it does help if you hail from an acting dynasty – but for Ranbir Kapoor his impressive acting ability and good looks have allowed him to carve out his own path. Sublime performances in 2009 has left directors knocking on his door.
Bollywood RANTS of the Year
WINNERS: Lighten up folks! Zayed ‘Grows Up’ & Bipasha’s at it again!
Bollywood stars love a good old rant don’t they – and in 2009 we got some belters.
First up is Zayed Khan. Having secured a role in the all-star film ‘Blue’ opposite Sanjay Dutt, Akshay Kumar, Katrina Kaif and Kylie Minogue, the actor suddenly felt he was being pushed to the back after the promise of a solo number went awry. “I’m learning my lessons the hard way,” he said. “In this industry it’s always the big fish eating up the little fish. Fine, hopefully, one day I’ll get there. But when I do I can assure I won’t behave the same way. But no more being taken for granted.”
Next up it’s Bipasha, and the girl always has to have a moan about something. In 2009 she hit out after being snubbed for Race 2. “I haven’t been approached for Race 2, but that’s fine”, she quipped. “In Bollywood the heroines are never signed for sequels. It’s a tradition. “Just check the sequels. The guys get repeated and the girls don’t. It’s a man’s world.”
Quote of the Year
WINNER: Is Shah Rukh Khan thinking of a career change?
“I always wanted to be a porn star. I am going to work with all the positivity and clarity to be a porn star. I have always been a huge fan of Sylvester Stallone who was a porn star before becoming a Hollywood superstar. I will take my flag and put it up in America after becoming the biggest porn star in the world.”