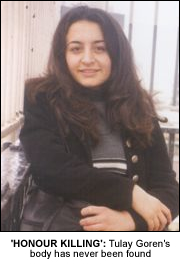 TODAY Mehmet Goren is beginning the first day of a life sentence, jailed for life this week for murdering his 15-year-old daughter Tulay in an honour killing.
Damming evidence against Mehmet was provided in court by his wife Hanim and daughter Nuray.
Here, Tulay’s sister, Nuray, reveals her pain at the loss of her sister and provides an insight into the culture struggle that hounded young Tulay to her death.
“Tulay Goren was my beloved sister. She was only 15-years-old and in the spring of her life when she was taken from us.
My family came to England in the 1990’s from rural Turkey in search of a better life. We felt that by settling in England we had been fortunate- we now lived in a country where we felt safe and secure. Additionally we had our family around us; we were all together and things looked so much better for us here than they had in Turkey. My brother Tuncay and sisters Hatice and Tulay were all in school receiving an education, the likes of which they could never have expected in Turkey. We had our whole lives ahead of us.
Then in 1998 our world changed forever. We discovered that Tulay had begun a relationship with a man. There was so much upset in the family and as I look back now and re-live those days in my mind, I remember like yesterday the stress and pressure that we all felt. I just wish that I had known what lay ahead for Tulay.
Tulay was caught in the middle of two clashing worlds. At home she was expected to be a dutiful Turkish daughter, whilst out of the family home she was exposed to a lifestyle that was completely at odds with her upbringing. At the same time our mother struggled to make ends meet, she coped the best way she could with my father Mehmet and his many issues.
In 1998 Tulay wanted to leave home. She had grown into a determined girl who knew her own mind and aged in her most difficult teenage years she clashed with her family over this issue. Here again, so much of our tradition and custom stood in the way of what Tulay ultimately wanted.
Tulay was last seen on the morning of 7 January 1999. In the last hours of her life my brother Tuncay, who was only eight-years-old at the time, was told to kiss his sister goodbye for the last time. He was told that he would never see her again. I know that this moment has haunted him ever since.
Tulay did not simply vanish into thin air that day, she was my sister and I loved her. Hatice loved her, as did her mother and her brother Tuncay. If she were alive, I know for a fact she would, without any doubt, have found a way of making contact with us.
The story of our family is almost too tragic to put into words. The death of Hatice in a car crash in 2006 was a second tragic event that left us wondering if we are cursed in some way.
My mother cannot think about anything apart from how different her life will be from now on. She was required to marry at the age of fifteen. She had no choice in this and throughout her married life it was expected she would behave as a loyal wife.
In taking this action, she has confronted and accused the men of our family. No one should fail to realise what this means within our culture. These people do not forget.
The jury has listened to the evidence over the previous weeks and on behalf of my mother and I, let me tell them how very grateful we are to them for being so attentive and receptive to the difficult issues they have had to come to terms with before they could reach a verdict.
For my father, I have only one request. I ask that he finally disclose the whereabouts of my sister.
I wake up at night wondering where Tulay may be and in quiet moments during the day, I ask myself if she suffered or knew what was in store for her. I ask that my father put an end to the nightmares that haunt us and allow us to retrieve Tulay in order that she may rest in peace alongside her sister Hatice.
My mother and I have a message for women who feel they have no voice. Let them find the courage to come forward to the authorities and speak out. Let them know that like us they will be listened to and taken seriously.
It is our hope that the people of Britain and elsewhere will read about this case. We hope that they will learn something of the honour code and that as a result no more Tulays will fall victim to this primitive custom.”
Related Articles:
Family plea to ‘honour’ killer father