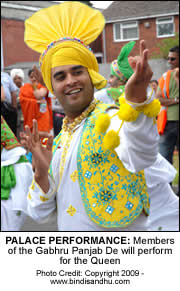 A MIDLANDS Bhangra dance group will perform in front of the Queen next week to mark the launch of the Delhi 2010 Queen’s Baton Relay.
Sandwell-based Gabhru Panjab De are hoping to get a royal seal of approval for their performance at Buckingham Palace next week.
The group, which comprises of dancers, singers and dhol players, were invited to celebrate the launch of the 240 day relay which will make its final journey at the opening ceremony of the Commonwealth Games in Delhi, India next year.
The event will be attended by a host of famous Indian sport celebrities including Abhinav Bindra, India’s first individual Olympic gold medalist, World Cup winning cricket captain Kapil Dev and tennis ace Sania Mirza.
The groups’ manager, Jaz Dhami, said it was an “honour” for the group to be invited to perform in front of the Queen.
“It’s a great honor for us to perform in front of Her Majesty and all the other VIP delegates and distinguished guests at Buckingham Palace,” Jaz said.
“We also look forward to seeing India host the 2010 Commonwealth Games and hopefully we’ll get an invite from India to perform at the opening ceremony of the games next year!”
During next week’s launch her Majesty the Queen will insert a message into the baton, which will then be handed between a number of Baton-bearers in the form of a relay.
Following the event, the baton will be carried around all 70 Commonwealth Nations. It will then be opened, and the message read out, at the opening ceremony of the Commonwealth Games in Delhi, India.