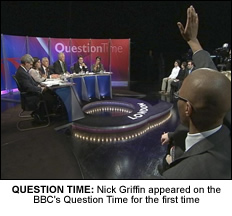 DESPITE the best efforts of thousands of anti-fascist campaigners BNP leader Nick Griffin made it onto BBC’s Question Time last night.
Millions tuned in to see Griffin confirm what we already knew – he is and always will be a racist who tries to legitimise his hatred through an ‘elected’ seat.
The fury of the BBC’s decision to allow him a on to a channel which is funded, amongst others, by thousands of ethnic minorities, continues to rumble on.
But what did we all make of Griffin on Question Time last night?
Muhammad Abdul Bari, Secretary-General of the Muslim Council of Britain gives us his views…
“The fears of many British Muslims and other Britons were confirmed last night as the BBC broadcasted to millions of viewers the extraordinary racist and offensive views of extremist far-right leader Nick Griffin. As predicted, he made it no secret in demonstrating his intense Islamophobia, firing malicious slanders against one of the world’s great religions. Many failed to answer the fact that the BNP’s rise can also be attributed to the fear of Muslims fanned by sections of the mainstream media which the BNP has sought to exploit in their rhetoric.
His ignorance on Islam and its history surpassed his arrogance. His particular slur, sadly unchallenged by any in the panel, that Islam ‘ordains as a religious duty the murder of Jews as well as other non-Muslims’ contravenes reality and is a recipe for further anti-Muslim hate. Far from persecuting other faiths, Muslim lands have been traditional safe havens. Faced with religious prosecution in Spain and Portugal, Jews sought sanctuary within the Ottoman Empire, and prospered for centuries in places like Salonica – till the Nazis drove them out. Christian churches and rights were honoured while Jerusalem was governed by Muslims. During the Rwanda tragedy of the 1990s, it was in mosques that both the Tutsis and Hutus sought refuge.  It is important to set the record right for millions of viewers.
It is a great shame that such vile ideas were given prime time spotlight by a world-reputed media broadcaster. However, it was a minor saving grace that the inherent idiocy of such fascist views was exposed for all to see. One still hopes that the BBC, and for that matter any other mainstream channel, channels their efforts towards safeguarding national unity and community peace rather than peddling in political expediency.