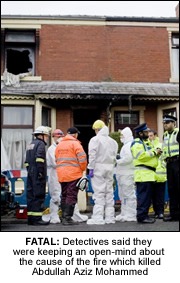 POLICE have named the man killed in a house fire in Blackburn yesterday and are renewing their appeal for information.
Abdullah Aziz Mohammed, 41, died after he and his family were rescued from a fire at their home on London Road. His 39-year-old wife, Ayesha, remains in a critical condition in Royal Blackburn Hospital.
His daughter, Siddiqah Mohammed, 14 and his son Mohammed Mohammed, 9 who were in the address with their parents are currently in a serious but stable condition at the University Hospital in Manchester.
Police said Mr Mohammed’s eldest son was away at University at the time of the fire.
A joint examination of the scene was carried out by Lancashire Fire and Rescue and Lancashire Constabulary specialists. Police said at this stage the cause of the fire is “unknown and is being treated as suspicious.”
Forensic investigations are currently ongoing to determine the cause of the fire.
Detectives said there were “investigating all possible avenues” and “keeping an open mind” about the circumstances surrounding the fatal fire.
Detective Chief Inspector Mark Gray from the Force Major Investigation Team who is leading the investigation said: “The fire is being treated as suspicious and forensic teams and detectives are investigating a number of possible causes.
“Understandably, this is an incredibly difficult time for the family and we have specially trained family liaison officers with them.
“This is a complex investigation and we have dedicated neighbourhood policing teams in the area distributing leaflets and working with the local community through the local mosque to provide reassurance and to ensure that they have the support they need at this difficult time.”
“The investigation is still very much at its early stages and I would urge anybody that has any information that might be useful to contact us.”
Anybody with any information is asked to call Blackburn police on 01254 51212