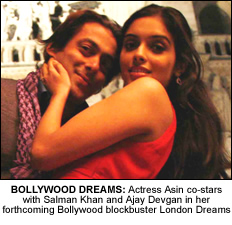 SHE’S quietly rolled onto the Bollywood scene, but for actress Asin her forthcoming film ‘London Dreams’ will prove she’s here for good.
Vipul Shah’s forthcoming rock flick, ‘London Dreams’ will be the actresses’ second Bollywood film. Her first,Ghajini, pitted her against Amir Khan, while her latest will see her share screen space with none other then Salman Khan and Ajay Devgan. Don’t be fooled though by her ‘2 Bollywood Films’ tag – Asin already established herself as an award-winning Tamil actress before Bollywood came knocking.
Looking ahead to this month’s release of London Dreams, we caught up with the actress for a quick chat…
How did London Dreams happen?
I was still shooting for Ghajini but Vipul had seen some of my South Indian films. So I got a call from him and he said he had a role of a headstrong talented girl in his next directorial venture after Namastey London. Obviously I was excited by the sound of it! (Laughs)
What was it about Vipul Shah that made you want to be part of London Dreams?
I love Vipul’s cinema, he showcases emotions really well and his films always have strong music. So it was actually a no-brainer that I wanted to be a part of this project immediately on hearing its script. In a way, this is my first authentic Bollywood film even though Ghajini released first. That’s because I had already played Kalpana in the south version of Ghajini before doing the Hindi remake with Aamir (Khan).
What was it like working with Vipul Shah?
Fabulous! Vipul is very organised, he does his homework really well so when you reach the sets the shot break downs are done, he knows exactly how he wants the scene done. And I am a complete Director’s actor. It’s important for me to understand my director’s vision and in that sense Vipul is very giving. I’ve been spoilt by him because now I think I will always want all shoots to be as planned! (Smiles)
Tell us about your character in London Dreams?
I play a south Indian girl, Priya, who is emotional but strong willed and ambitious at the same time. And she has two radically different sides to her. At home she’s a traditional girl clad in Indian outfits but the minute she’s out with friends, she’s a fire brand, and that shows in the way she dresses. And she’s also partly responsible for the conflict between Salman and Ajay’s characters. So it was a wholesome character to play.
This is the first time you’re working with big names like Salman Khan & Ajay Devgan. What was that like?
When I came on to the sets of London Dreams I didn’t know them. I knew they were way senior and was anxious just like any newcomer would understandably be. And then I’d heard so much about them from different people. Salman has a ‘bad boy’ image. Many told me that he was very temperamental and erratic!
Having worked with him I dispelled all those myths. I got to see a sensitive actor who had an absolute ball on the sets and went out of his way to make everyone comfortable. Both Ajay & Salman are also great off-screen friends and that shows on celluloid. Ajay, contrary to popular belief, was not reticent at all. He was very helpful and friendly! I realised that you find out the truth about people only when you work with them and get to know them better.
There’s very much a rock music theme behind London Dreams. How did it work for the film?
Oh! There’s so much that I can say! (Smiles) London Dreams has a backdrop of a rock band so it’s only right that the music should be an arterial part of the film. And I think that Shankar, Ehsaan & Loy have done complete justice to the film in that sense. The music is melodious but remains true to the essence of the film. It’s a very holistic album – there’s the masti of Punjab and the edge of contemporary music. I personally love Man Ko Ati Bhaave and Tapke Masti; they’re fun songs!
Everyone is waiting for London Dreams with bated breath. Tell us why we should watch it?
It’s an absolutely stunning looking commercial entertainer with emotions, humour, music and drama! It’s a big one for the families! We had a blast shooting it in the UK and I took back some really fond memories with me. The fantastic time we had on the sets and the chemistry between all of us will show on screen!
London Dreams releases in the UK on Thursday 29th October
Related Articles:
‘London Dreams is a film with a heart’ – Ajay Devgan Interview
Picture Gallery: London Dreams – Pictures from the Vipul Shah Blockbuster