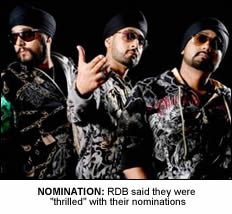 ACCLAIMED music producers RDB have been nominated for two awards at the forthcoming Urban Music Awards.
The DJ brothers, Kully, Manj and Surj will compete with a host of mainstream stars at the ceremony next month in a bid to land awards for Best UK Asian Act and Best Band.
The Urban Music Awards will celebrate its 7th show this year and are held annually.
RDB, who have been making and producing music for over a decade, are best known for their fusion of Bhangra and Garage.
Recently the group have moved into the realm of Bollywood, working on films including Namastey London and Singh is Kinng.
The brothers will compete with chart topping bands including The Noisettes, N Dubz and JLS for the Best Band gong, while the likes of Jay Sean and M.I.A will provide stiff competition for the Best UK Asian Act award – a new category which has been introduced to the UMA’s this year.
“We are thrilled at the news,” RDB’s Surj said.
“It’s an honour that our work is getting recognised and we are pushing Asian music in the right way. It’s brilliant that the UMA’s have a category for British Asian Music.”
Jordan Kensington from the UMA’s said: “Always striving to be the multi-cultural melting pot for talent, the UMA’s are proud to also launch the Best Asian Music Act category to promote and increase the exposure and awareness for acts of Asian origin.
“The Urban Music Awards will allow the millions of followers of music and musicians of Asian origin throughout the UK the opportunity to vote for their favourite Asian Music act to win this prestigious award.
“Also, the launch of this new category will also give birth to the Desi UMA rising star competition. The competition will see entries from lesser known British Asian acts from all around the UK with the winner to be selected,  announced  an giving an opportunity to perform live  at the UMA’s  next month’’
The UMA’s will take place on 1st November 2009