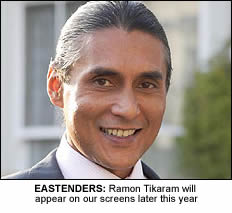 BRIT actor Ramon Tikaram is to join the cast of Eastenders, the BBC have revealed.
The 42-year-old actor, famous for his role as Gay courier Ferdy Garcia in the hit BBC series This Life, will appear on our TV screens later this year.
He will play Mohammed Qadim Shah, father of newcomer Amira Shah, played by Preeya Kalidas.
“It’s great to be joining a programme that represents a Muslim family in a positive light,” the actor said.
His character, Qadim, is described as an “intelligent and dynamic” man who “oozes charm and sex appeal.”
Qadim’s arrival on Albert Square will see him reunite with his daughter, Amira, who have endured a stormy relationship since the death of her mother Shahana.
During their early years Qadim was a “doting father” to Amira, “spoiling her, indulging her and creating the princess she is today.”
But following the death of his wife from cancer he turned into a “bitter, controlling tyrant”, and was sent to prison as a result of dodgy bank loans and fraudulent investment schemes.
Viewers will initially see Qadim when Amira visits him in prison and later again when he’s released in time for his daughter’s wedding to Syed.
Tikaram said joining the Eastenders cast was a “fantastic” opportunity to be working with “old friends including Nitin Ganatra and Preeya Kalidas.”