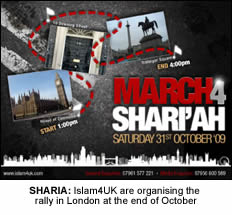 A LEADING Muslim group has slammed plans for a rally in London proposing the implementation of Sharia law in Britain.
Islam4UK is planning a mass demonstration in London at the end of the month supporting an overhaul of the British legal system in favour of Sharia law.
On their website the group, who have been accused of being a front organisation of extremist group al-Muhajiroun, said it was time “for authority to be handed to Muslims.”
But the Muslim Council of Britain accused them of deliberately provoking “hatred and division.”
Details of the rally, planned for 31 October, emerged on Islam4UK’s website this week.
The group are calling for Muslims to gather in London for the rally which will begin at the Houses of Parliament before moving onto 10 Downing Street and finally Trafalgar Square.
In a video message posted on the website, the groups leader Anjem Choudary said Britain was beset with a number of problems including “the credit crunch, “MP’s exploiting resources” and “drug and gun culture amongst the youth”, and that Sharia law would offer a “solution to the British public in order to bring them out of the darkness and oppression of man made law.”
Choudary also slammed the country’s political leaders accusing them of being unable to better the country, adding: “Britain does not need a change of leader, but needs a revolution; indeed it needs an Islamic revolution.”
The proposed rally comes amidst rising racial tensions following a number of anti-Islam protests across the country by the English Defence League.
The Muslim Council of Britain hit out at Islam4UK saying it “risked sparking violence” and masked “the real threat from rising Islamophobia and far right fascists like the EDL and BNP.”
The MCB also hit out at the Daily Express newspaper after they published news of the rally in a front page splash under the headline ‘‘Now Muslims Demand: Give us full Sharia Law’.
Muhammad Abdul Bari, Secretary General of the MCB, accused the newspaper of being “irresponsible” for creating the impression the views expressed by Islam4UK were shared by British Muslims as a whole.
“It is very well known that these extremist groups are a handful of people and do not represent the views of the mainstream Muslim public,” Mr Bari said.
“Despite that, certain sections of the media choose to give them disproportionate attention, giving them oxygen of publicity and misrepresent their views as those of Muslims.
“This is very irresponsible as it is bound to create further tension; it risks fuelling Islamophobia which has resulted in increased attacks on British Muslims and their institutions and properties,” he added.