Bollywood star turns back the clock in new blockbuster 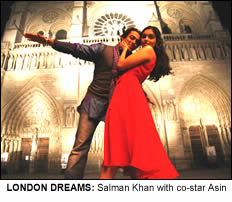 Ardent Bollywood buffs who’ve seen the promos of the Man Ko Ati Bhave number from London Dreams are delighted at Salman Khan’s tribute to Dharmendra.
Khan, in his adorably mad style, does the age-old veteran’s dance moves whilst wooing co-star Asin. The track was shot in cold Paris against the backdrop of the Eiffel Tower.
Confirming that Salman’s moves were consciously modelled on the lines of Dharmendra’s, choreographer Rajeev Surti said: “When we were discussing the choreography, Salman suggested that we incorporate Dharamji’s famous moves. He is a big Dharmendra fan and felt that the steps would go really well with the fun feel of the song. He managed to ape Dharam ji’s moves perfectly and added his own unique flavour to them.”
Incidentally, when the number was being shot, French President Nicolas Sarkozy had just won the six month presidency of the EU, and to celebrate, the Eiffel Tower was lit up in the blue and gold of the European flag. “We were lucky to grab that rare sight,” added director Vipul A. Shah.
Related Articles:
‘London Dreams is a film with a heart’ – Ajay Devgan Interview
Picture Gallery – London Dreams: Pictures from the Vipul Shah blockbuster