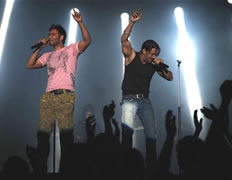 Cast: Salman Khan, Ajay Devgan, Asin
Arjun and Mannu have been childhood friends with little in common except their family’s vague connection with music. Arjun dreams of making it big on stage one day to fulfill his grandfather’s dream.
Meanwhile, Mannu has little interest in his father’s musical instruments. He is happy enjoying the good things in life.
But little do they know that music will strengthen their friendship and then test it with catastrophic results.
Arjun diligently pursues his dream, at the risk of running away from an uncle who was his only family. Roaming the streets of London he finally takes shelter in a music shop where he learns all about the music world.
It is not long before Arjun creates a band with Zoheb and Wasim, two brothers from Pakistan.
But back in Punjab, Mannu starts his musical profession by playing at wedding celebrations. He is helped by Priya, a music enthusiast from a conservative South Indian family.
When Arjun gets Mannu to London and makes him part of his band, Arjun realises he’s created the biggest threat and obstacle to his own ambitions.
Mannu‘s irreverent style of performing soon becomes an instant darling of the crowds. What has taken Arjun years to achieve, musical genius Mannu does overnight.
Feeling betrayed, Arjun’s unbearable pangs of jealously and insecurity worsens when Mannu unwittingly woos and wins his secret love, Priya. As he battles his inner demons, Arjun slowly devises a sinister plan to destroy his best friend.
Over a three city tour spanning Paris, Rome and Amsterdam, Arjun sends a naive Mannu on a downward spiral of sex and drugs.
This almost breaks Mannu’s spirit and his love-life days before a show at Wembley, a venue where Arjun hopes to have his moment of glory.
But a rude shock awakens Arjun at Wembley at the expense of his band, his friendship and his credibility – a humbling experience that teaches him the true meaning of life’s acceptance.
London Dreams is a Bollywood musical film directed by Vipul Shah. His previous releases including Waqt- Race Against Time, Namastey London and Singh Is Kinng have been huge box office hits.
So judging from his past work, London Dreams is expected to do well upon release in UK cinemas.