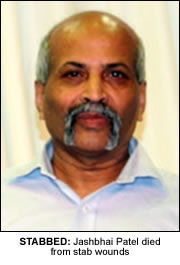 A MAN accused of murdering popular Luton newsagent Jashbhai Patel has pleaded not guilty to the charge.
Richard Dettmer, 38, of no fixed address, appeared at Luton Crown Court also pleaded not guilty to a charge of wounding with intent, in relation to the stabbing of his friend James Foster in the early hours of 14 June.
At about 6.30am the same morning there was an incident at Mr Patel’s newsagents called Moons, in Park Street, during which the 59-year-old man received fatal stab wounds.
The murder trial is due to take place on 30 November. Dettmer was remanded in custody and there was no application for bail.