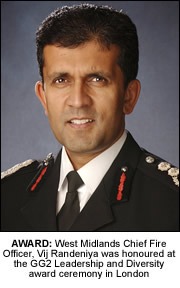 WEST Midlands Chief Fire Officer, Vij Randeniya has won the prestigious Hammer Award at this year’s GG2 Leadership and Diversity award ceremony held in London.
Launched in 1999, the GG2 Leadership and Diversity Awards Dinner showcases ethnic achievement.
All award winners are outstanding individuals who have excelled and overcome barriers against the odds.
The Hammer Award is the highest accolade available at the ceremony and is presented to people who have broken the proverbial glass ceiling, reaching the top of their profession.
Chief Fire Officer Randeniya said: “It is a great honour to receive this award.  Not only is a great personal achievement, but it is also a reflection of the hard work, dedication and professionalism of firefighters and support staff within West Midlands Fire Service who continuously strive for excellence in their service to the community.”
The ceremony was held at the Grosvenor Hotel in Central London. Former British Prime Minister, Tony Blair was keynote speaker at the event and among the judges was Peter Preston, former editor of the Guardian newspaper.
Vij Randeniya OBE, started his firefighting career in London in 1983, transferring to Nottingham Fire and Rescue Service in 1999 as a Senior Divisional Officer.
He joined West Midlands Fire Service as Assistant Chief Fire Officer in 2001.  He was appointed Deputy Chief Fire Officer in 2004 and became Chief Fire Officer in March 2009. .