Showdown was “not an option” at the time, reveals Khan’s father 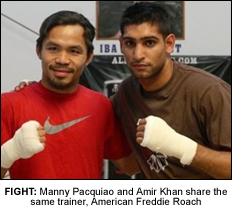 AMIR Khan’s advisers turned down a request to fight Manny Pacquiao, according to reports.
The 22-year-old’s father, Shah Khan told The Bolton News the potentially explosive match up was “not an option” at the time of the offer.
Khan has been out of the ring since he clinched his first world title against beat Andreas Kotelnik on points in July.
But he is expected to return to training later this month at Freddie Roach’s Los Angeles gym where he will spar with Pacquiao ahead of the Filipino’s contest with Miguel Cotto in November.
“We were offered the fight a few months ago but it is not an option at the moment,” Amir’s father Shah Khan told The Bolton News.
“Maybe in a couple of years it is something we would look at but not at this stage.”
The newspaper also quoted Bob Arum, Pacquiao’s promoter who said the offer was made soon after Pacquiao defeated Ricky Hatton.
“Amir’s name was on the table, we offered him the fight, but his father, and his family felt it was too early in his career,” Arum said.
“Amir Khan has all the attributes of a great champion, and I think he’s going to be a superstar in the sport.
“Okay, so he had a loss in his career, he made a mistake, but he looks great now. It was a great performance which won him the world title against Kotelnik, and you can only see him getting better. I can definitely see Amir and Manny meeting in the ring down the line.”
Khan could make the first defence of his WBA light-welterweight title against unbeaten Ukrainian Dmitry Salita this December.
Salita is the mandatory challenger for Khan’s title and promoter Frank Warren is currently in negotiations with his promoters over the end-of-year showdown.

New Year, New Me: Getting Fit with Dal Dhaliwal