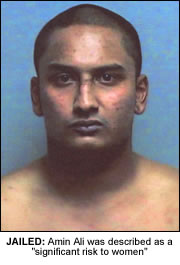 A MAN who horrifically beat his girlfriend with a hammer has today been jailed for more than six years.
Detectives described 24-year-old Amin Ali as a “significant risk to women” following the assault on his long-term girlfriend in February.
The woman, who has not been named, suffered broken bones and a bleed on the brain following the attack.
Today, Ali, of Cavendish Road, Leicester was jailed for six years and eight months after pleading guilty to GBH with intent, ABH and False Imprisonment at an earlier court hearing on June 26.
The court was told a man called police at around 10pm on February 6 reporting seeing Ali dragging his girlfriend down the street by her hair. Ali pushed her into a green Fiat Punto and drove off.
When police arrived on the scene they found blood splatters and a handbag belonging to the victim which led officers to an address in Birmingham.
There they found the victim who had suffered a horrific attack at the hands of Ali.
She had sustained a depressed skull, and severe bruising to the face and body, consistent with being hit with a hammer. She had a broken nose, broken finger and a shoe print on her thigh. Her head injuries required between 20 to 30 stitches and she’d suffered a bleed to the brain.

Detective Chief Inspector Chris Redfern, who led the investigation, described the assault as a “vicious and violent attack”. He also praised the victim for testifying against Ali.
“This sentence acknowledges the fact that Ali is a dangerous offender and a significant risk to women. The biggest praise needs to go to the victim and her family who have shown great bravery in working with us to bring Ali to justice”, Det Redfern said.
“This was not the first assault she had suffered at the hands of the defendant. He had abused her physically and mentally for a number of years.


“Her bravery in standing up to him, has finally given her the chance of freedom from this man and his actions.”