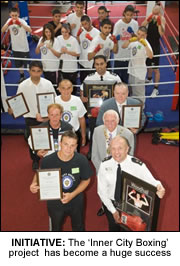 A WEST Midlands Police officer behind a city project that has worked wonders in getting teenagers off the streets and into the boxing ring has secured funding to keep the initiative running for a further two years.
Inspector Akeel Najib came up with the ‘Inner City Boxing’ project in March 2008 in a bid to engage with young people in Aston who had been in contact with the police.
Akeel, who was the sergeant for Aston at the time, enlisted the help of former Super-Middleweight World Champion Richie Woodhall and the project became an instant success.
Last year Akeel moved to policing in Wednesbury and West Bromwich and immediately launched the project in Sandwell.
With the initiative still running in Aston, Akeel has now secured funding through the Safer Sandwell Partnership to keep the hugely popular project going for a further two years.
Yesterday Akeel joined Chief Superintendent Stephen Dugmore and Sandwell Mayor Geoff Lewis in honouring ex-boxer Woodhall for his contribution to the project.
Woodhall and his team, which included dad Albert, were presented with a Commander’s Special Recognition Award.
“Inner City Boxing is a great opportunity for youngsters,” Woodhall said. “It is an opportunity for them to be a part of a sporting project that provides mentoring and focus, while carrying out an enjoyable activity.

“I was born and bred in West Bromwich so feel a personal link with the town and am glad to be given the opportunity to give something back to the community I grew up in.”