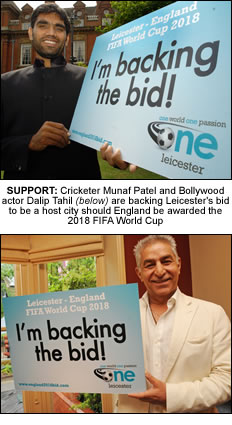 A BOLLYWOOD star, a world-class cricketer and world record holder have all backed Leicester’s bid to be a host city for the 2018 FIFA World Cup.
Bollywood veteran Dalip Tahil, Indian bowler Munaf Patel and Leicester’s very own ironman Manjit Singh have all given their support to the city’s bid.
Leicester is one of 15 cities bidding to become a host city, should England host the 2018 FIFA World Cup.
The final decision won’t be made until December, but the city has already drummed up impressive support from a host of celebrities.
Cricketer Munaf Patel, who plays for the Indian national team and the Rajasthan Royals, got behind the bid on a recent visit to Leicester.
“I’ve got friends and family in Leicester,” he said. “It’s like a second home to me, so I try to visit when I can – and that’s why I would love to see the World Cup here. It would be great for the city – and for the people who come here to watch the games.”
Actor Dalip Tahil, who has appeared in over 100 Bollywood films, said he had been impressed by the city’s sporting venues when he visited Leicester as ambassador for the Special Olympics National Summer Games which took place in the city at the end of last month.
“I have the highest regard for Leicester as a sporting city,” he said.

“It’s a fabulous place for all sports, but particularly for cricket, rugby and football. The city has proved that it can host major events, like the Special Olympics, so it seems only right that Leicester should be the natural choice for World Cup matches in 2018.”
The city’s bid was also backed by local hero and 36 world record holder Manjit Singh.
Leicester’s very own ironman said he was delighted to put his weight behind the bid.
“There are so many different communities in Leicester that it’s the perfect place for the World Cup,” he said.
“The Special Olympics has already put Leicester on the map, but the World Cup would be the icing on the cake.”
Leader of Leicester City Council, Cllr Ross Willmott, said: “We are convinced Leicester will make a great host city.
“Our facilities, the ease of access, our diverse population, our record as a great sporting city and the huge enthusiasm of our people for sporting success all give us a real chance of helping England win the bid for 2018.”
More information about Leicester’s bid, and a link to the voting page on the England 2018 Bid website, is available at www.backleicestersbid.com

Shak Khan – Beast from the East

Amit Kumar Awarded for “50 Years of Contribution to Indian Music” by the House...