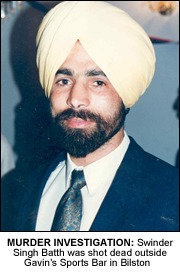 DETECTIVES investigating the murder of a Wolverhampton father-of-four have charged seven men and one woman with his murder.