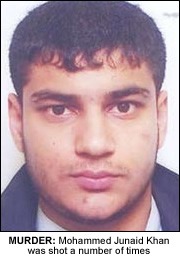 DETECTIVES investigating the murder of a man shot to death in the car park of a doctor’s surgery in Oldham have gone out into the community to appeal for information.
Mohammed Junaid Khan, 21, was gunned down in cold blood in the early hours of July 9.
He was shot from behind a number of times in the surgery car park in Block Lane, Chadderton at 12.10am. As he lay on the ground, the gunman approached and shot him again at close range with an automatic weapon.

A post mortem examination concluded he died as a result of multiple gun shot wounds.
Ina fresh appeal for information officers delivered leaflets and spoke to members of the community in the Werneth area of Oldham in the hope of gaining vital information. Detectives also visited two mosques in the area.
Detective Chief Inspector Steve Eckersley who is heading the murder investigation said he believed “answers to [the] murder lie in the community.”
He said he was keen to speak to anyone who may have witnessed a silver Mitsubishi Shogun seen in the area around the time of the shooting.

The car was seen driving along Block Lane after shots were heard and was found on fire not far from the murder scene.
He said police were also keen to speak to Junaid’s close friends to try and “piece together a possible motive for the attack.”
“Junaid was gunned down in a horrific attack and it is vital that we work with the community to find the people responsible,” he said.


“We still believe the answers to this murder lie in the community. We are still, for example, interested in speaking to anyone who saw the silver 4×4 on Wednesday night.

“I know a number of people went down to the car park following the shooting and I would urge them to speak to police if they haven’t done already.”