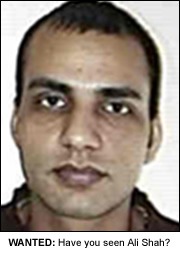 A ‘FAITH’ Healer’ from Leicester who conned a family out of thousands of pounds could be hiding in Birmingham, police have said.
Detectives from Leicestershire Constabulary are eager to trace Ali Shah in connection with the fraud investigation.
The victim, from Scotland, paid Shah a considerable amount of cash for faith healing services which never materialised.
Shah, who also goes by the name of Ali Shan, Shahid Ikram and Khalid Rafique, has links to Birmingham and London.
Detectives are also exploring the possibility he may have left the country.
PC Jim Mungovin, who is investigating the incident said: “We urgently need to trace Shah. We know until recently he was living in the Leicester area, but now we believe he may have gone further a field.
“We also think there could be other people out there who have been a victim of this man. If you have, or you know someone who has then again, please get in touch.”

He added if anyone knows of Shah’s whereabouts they should not approach him and call the police instead.
Two men have been arrested in connection with the inquiry and released on police bail pending further enquiries.