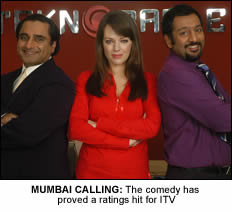 IT’S ITV’s new primetime sitcom and it’s brought the best of British Asian comedy back onto the small screen. Mumbai Calling brings the hilarious world of the call centre into our very own living rooms.
Starring the leading men in British Asian comedy – Sanjeev Bhaskar and Nitin Ganatra – season one of the sitcom will be released on DVD later this month. We spoke to Sanjeev and Nitin to get the lowdown on the new British comedy…
How did you become involved in Mumbai calling?
Nitin Ganatra: You got involved first…
Sanjeev Bhaskar: I got involved first. Allan McKeown, producer, contacted me and said he had an idea for something set in a call centre. I got together with Laurence Marks and Maurice Gran who were already working on this and thinking of ideas. We fashioned a pilot script and we shot the pilot. When we came back, we thought that there was more to be done. Marks and Gran then went off to work on another project. I then rewrote it and then brought in Simon Blaskwell, who’s a friend of mine and a brilliant writer. That kicked off seven episodes. We got other writers in, Nitin wrote one of them, as well. So I was in it from that stage. I brought you in quite early, I think…
NG: Yeah, you told me about it and suggested we put my name forward to play Dev and I got the gig. I think you suggested me for writing as well didn’t you?
SB: Probably yeah, I thought you could do it.
NG: It was a huge learning curve for me. It was fantastic.
What is Mumbai Calling about?
NG: It is about a guy called Kenny Gupta, played by Sanjeev Bhaskar, who is working in a call centre in India. It’s about his cultural dichotomy, being British Asian in India, and his shenanigans with his colleague Dev Rajah, played by me in a Mumbai accent. And in the mix is Terri. What’s her surname?
SB:…Terri Johnson…
NG: Terri Johnson who comes to supervise Kenny and press her authority on him.
SB: Really? Is that what it’s about?
NG: Yeah
SB: That’s what it’s about.
NG: It’s set in a call centre
SB: …In Mumbai.
NG: That’s the way I read it
SB: You read it right. Your reading is good. His reading ability is amazing!
NG: Slightly dyslexic
SB: Yeah only a bit though!
What’s it like working in Mumbai?
SB: What’s it like to work in Mumbai? That’s a difficult question. Where do you start? It’s an interesting experience because it’s a really vibrant city. New York was the closest thing you could associate to Mumbai. I speak the language and I read and write Hindi, and I’d visited it enough times, so I was quite comfortable with Mumbai. One of the things about India is the pace. The pace seems really slow and yet the energy is frenetic. That’s a weird headspace to be in. So, it’s all the stuff that you encounter which makes it, in many ways, such a typical experience of India. What did we have? We had pigeons in the studio.
NG: Pigeons in the studio, crows outside. Firecrackers that sounded like bomb blasts to scare away the crows.
SB: Yeah which is not particularly comfortable in Mumbai. People are very, very eager to please, as well.
NG: Yeah people love working. We come from a work ethic. The Indian culture does have a very strong work ethic.
SB: See, my Indian side says: work! My British side says: tea break.
NG: Call in a sickie.
SB: It’s that kind of clash of cultures right there. Tea break/work. Sickie/more work. 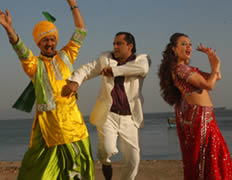 How do you think Daisy Beaumont (Terri Johnson) coped with working in India?
NG: She was really good. She didn’t seem shell-shocked by India at all. She really embraced it straightaway. It can be a shock. When you step out of that airport, it can really hit you hard, India. As soon as you step out of the airport, you get blasted with everything. Visually, there are so many people, and the smells and the noise and everything. It over stimulates you straightaway, India.
SB: Also I think India’s overwhelming. I don’t think I’ve ever met anyone who’s been to India, come back, and you say “How was it?” and they go, “It was all right.” They either say, “I loved it”, or “I hated it.” There’s an extreme reaction. You can’t turn in any direction and not see something that will overwhelm you, sensually. She took that on board really well.
Any words about the various guest stars who appear in the series?
SB: One of the real delights about doing the show was that we were able to fly a couple of people out to guest star in them. My friend Richard E Grant came out. He was fantastic. That was a really fun week’s work, actually. And he was brilliant just improvising. Again, just really getting into the swing of it.
NG: He loved it, didn’t he?
SB: Yeah, loved it from the moment he got there.
And Chunky Pandey?
NG: Smooth isn’t he?
SB: Chunky Pandey’s smooth When I was writing and performing Goodness Gracious Me, I wrote a character called Chunky Lafunga. I just thought Chunky was such a great name to put out there in the universe. “Lafunga” means, kind of, ruffian. So Chunky Lafunga was this created Bollywood hero. So to get Chunky Pandey, whose name I nicked, really – nothing to do with the character – to play Chunky Lafunga in this was just poetic justice of some kind. Again he was great. He didn’t have to much to do. Very smooth.
NG: Yeah. He was a real gentleman, very gracious about it all.
Any less pleasant memories from the shoot?
SB: We were coming back from filming…
NG: The dance sequence…
SB: Yeah, the dance stuff, which was in the southern tip of Mumbai. We were staying in the north-central part of the city. The traffic is the worst anywhere in the world. It’s like half a billion sloths have decided to go off and get breakfast in the forest. It just crawls along. I think it was about three-and-a-half hours. It wasn’t a people carrier, was it? It was like a…
NG: A jeep
SB: Four-wheel drive thing. Me and Nitin were where you Westerners keep the dogs. At the back, we were at the back…
NG: We were in the cage
SB: Three-and-a-half hours. We joked and laughed for about an hours-and-a-half, two hours, and then slowly the conversations began to fade. And then we were just like Guantanamo Bay inmates. Head lolling…
NG: Drool…
SB: Oh it was awful. And we couldn’t get off the road or get onto any other road. And the driver said this was the shortest. Do you remember?
NG: Yeah “this is the quick route”…
SB: And we got there before the others did. They took another route so they were in it for slightly longer. But car journeys were mildly hellish. 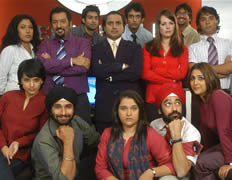 How is filming in India different?
SB: There’s a lot of stop and start. It’s a lot more labour-intensive in India than it is in the West. So you’ve got a lot more people on set. I don’t remember anyone just standing around doing nothing. There were all doing something.
NG: Everyone had something in their hand. We didn’t have stands for the monitors, we had people who just stood there and held it for you.
Was it difficult to write a show set in India?
SB: As writers, I think we were trying to be careful when we wrote about not making the Indian characters look stupid. That was one of the fundamental things about the show was that it wasn’t about how these Indians in India are daft and silly and just don’t get the western way of life because of some innate stupidity. I think in that sense we were careful when we were writing about not pushing those buttons.
Mumbai Calling is available on DVD for £19.99 from 13 July 2009 courtesy of Sony Pictures Home Entertainment
Win a copy of Mumbai Calling: Season One on DVD. Click Here!