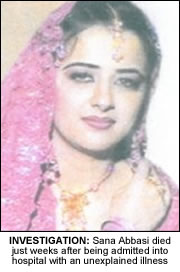 TWO people have been arrested in connection with the sudden death of a 22-year-old Bradford woman.
Sana Abbasi, 22, died on Friday several weeks after she was admitted to hospital with suspected poisoning.
Two people – believed to be her husband and mother-in-law –were initially arrested by detectives on suspicion of murder but were released on bail pending further enquiries.
Detectives arrested two further people – a 28-year-old man and 25-year-old woman – this morning in connection with Sana’s death.
The 22-year-old, who lived in the Pollard Park area of Bradford, arrived in the country after marrying a man from the city. She gave birth to a young baby three months ago.
A spokesperson for West Yorkshire Police said they are awaiting toxicology results in a bid to determine how Sana died.
They are also appealing for any information from those who knew the family.
“Police believe people in the community will know what happened to Sana and are appealing to anyone who knows how she may have come to harm to contact them,” a spokesperson for West Yorkshire Police said.
If you have information you can contact detectives on 01274 373 631, or in Punjabi on 01274 373 659.