Police still appealing for information year on from tragedy 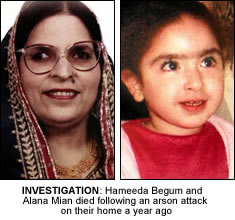 A 14-year-old boy and 22-year-old man, arrested on suspicion of murder have been released without charge.

Police are still appealing for witnesses to the blaze that claimed the life of a four-year-old girl and her grandmother in June 2008.

Four people were inside the house at the time of the blaze: Hameeda, her husband Mumtaz, her 24-year-old daughter Saima and four-year-old granddaughter Alana.

The occupants were rescued from the house by firefighters, but Hameeda later died in hospital. Alana died a number of weeks later on 1 August 2008.

Alana’s mother, Saima, and firefighter Steve Morris, were also seriously hurt but have since been released from hospital. Steve is still recovering from his injuries at home.
A spokesperson for Greater Manchester Police’s Major Incident Team said they “remain committed to finding who is responsible for the tragedy.”