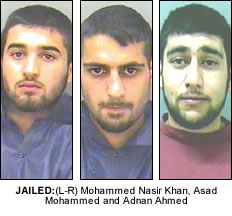 A LEARNER driver helped police apprehend five robbers who attacked and robbed a Blackburn jeweller before feeling.
The gang, all from Birmingham, entered Rahman’s Jewellers on Whalley Range posing as customers before they launched a vicious attack against the owner.
As they fled the scene a driving instructor, who was conducting a lesson at the time, spotted the men and instructed his learner driver to follow them. He then called the police and gave them a running commentary until the robbers reached the motorway.
Today four of the five-man gang were jailed after pleading guilty.
Asad Mohammed, 25, of Newton Road, Sparkhill, Birmingham was sentenced to four years eight months; Mohammed Nasir Khan, 19, of Walford Road, Birmingham received three years four months; Adnan Ahmed, 21, of Baker Street, Sparkhill, Birmingham also pleaded guilty to dangerous driving and was sentenced to three years.
A 17- year-old man from Birmingham, who cannot be named for legal reasons, received three years.
Another man, Shah Hussain, 29, of Lichfield Road, Birmingham, was found guilty of robbery after a three day trial. He will be sentenced on 23 July at Preston Crown Court.
The court heard how the gang, wearing balaclavas and masks, threatened the owner of the jewllers with an axe, hammer and knife shortly after entering the shop.
They hit the owner on the head before smashing their way out through the shop window and making off with jewellery in a black Audi getaway car.
They attempted to set the car on fire before abandoning it and escaping in a Fiat Punto at speed.
Police officers including the Road Policing Unit, Armed Response Unit and force helicopter followed the Punto down the M65 motorway towards Burnley.
Officers from West Yorkshire assisted with the pursuit when the car crossed the force boundary before it was abandoned in Portsmouth, West Yorkshire, following a collision with another car. All five were arrested soon after in the area.
The owner of the shop was treated in hospital for head injuries, a laceration to his face and cuts to his hands. His wife, who was also in the shop at the time was badly shaken but was not injured.
Susan Riley, Divisional Crown Prosecutor for Crown Prosecution Service in Blackburn said: “This was a particularly serious crime with a number of aggravating features. The defendants had equipped themselves with weapons and were prepared to use them, subjecting the shop owner and his wife to a terrifying ordeal. They went to considerable lengths to escape arrest, driving the getaway vehicle dangerously and endangering other road users.”