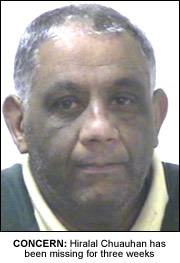 POLICE in Coventry are concerned for the welfare of a 58 year-old man who has been missing for over three weeks.

Police believe Hiralal may be in Coventry, Birmingham or even Leicester and would urge anyone who knows of his whereabouts to come forward.

Detective Inspector Wendy Bailey from Little Park Street police station said: “We are concerned for Hiralal’s welfare as he appears to a left without any trace.

“We are aware he visits Coventry city centre and other areas of the city and believe he has friends in Birmingham and Leicester.

“I would appeal for Hiralal Chauhan or anyone who may have seen him to contact us to let us know he is safe and well.”

Hiralal is described as 5’6” tall and of medium build with a tattoo of black writing on his hand.

Hiralal or anyone who knows of his whereabouts is urged to contact West Midlands Police on 0845 113 5000.