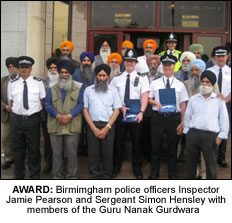 A TEAM of West Midlands Police officers who helped rebuild relations with the Sikh community following a violent disorder at a Vaisakhi mela two years ago have been honoured with an award.
Committee members from the Guru Nanak Gurdwara, on Smethwick High Street, Birmingham, surprised Inspector Jamie Pearson and Sergeant Simon Hensley with commemorative plates to thank them for their support over the years and wish them well as they prepare to move onto new roles.

The officers have been working closely with the temple committee to rebuild the relationship between the police and the community, following a violent disorder that resulted in a 44-year-old man being seriously assaulted at the Vaisakhi celebrations in April 2007.

Following the incident the Sikh community came under severe scrutiny by the media nationally and internationally, and relationships among the local community became increasingly strained.

President of the committee, Tarsem Singh Shoker, said: “We are very grateful for the work the officers have carried out for our community and we look forward to working with their successors and West Midlands Police in the future.

“We wanted to formally recognise the hard work Insp Pearson and Sgt Hensley have put in over the years to show our appreciation.”