Community comes together in support of Multi-Faith Football Match 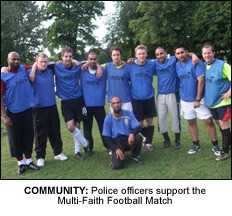 OFFICERS from a Leicestershire police station swapped their uniforms for sports kits in support of a Multi-Faith Football Match in the Highfields area of the city.
The match, which was organised by the St Philip’s Centre, brought together local community religious leaders, police officers from Spinney Hill Park police station and a visiting multi-faith group from Sweden with the aim of promoting stronger links between different faiths and agencies in the area.
It took place in Spinney Hill Park on East Park Road and builds on the tradition of an annual cricket match which is held between local Imams and the Clergy.
PC Yusuf Nagdi, neighbourhood officer for North Evington, who took part in the match said: “We would like to thank the organisers for including us in this tournament. The event was attended by people of different religions, nationalities and cultures and passed without incident. This is exactly the type of event that builds relations between the police and the wider community because it shows officers to be part of the community.”
Suleman Nagdi MBE DL, from the Federation of Muslim Organisations, added the match was testament to the way sport can tackle discrimination.
“Leicester can pride itself as perhaps the only city in Europe where every community will be a minority in a few years time,” he said.
“This football match proves what a skilled city can offer in terms of community cohesion and good relations.
“We believe that a sporting event of this nature, which involves several faiths of Leicester and Gothenburg, will contribute to our life in Leicester and beyond. It shows how we can creatively use sports as a means of tackling discrimination at every level.”