Home Uncategorised Bollywood Strike Over: Get ready for New York

Back to buisness for Indian film industry 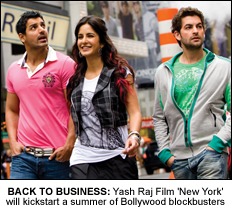 BOLLYWOOD fans can dance around the trees –  the stand-off between producers and multiplex owners is over.
With only B-grade flicks, reruns of old hits, and regional cinema on offer for the past few months, audiences are eager for fresh content at the box office.
First of the biggies is Yash Raj Films New York. Buzz for the film actually started at the end of 2008, when the trailer was released with Shah Rukh Khan vehicle Rab Ne Bana Di Jodi. YRF’s latest is all set for a worldwide release on 26th June 2009.
Directed by Kabir Khan and Produced by Aditya Chopra, the film sees John Abraham and Katrina Kaif together in their first outing. After John raised temperatures in his yellow trunks in Dostana, the actor is all set to go one step further, with reports he stripped for one scene. Neil Nitin Mukesh and Irrfan Khan also star in this highly anticipated project.
New York is a contemporary story of friendship set against the larger than life backdrop of a city often described as the centre of the world. For most of us, larger events in the world are just headlines in the newspapers but these events can change our lives… forever. New York is one such story of 3 young friends whose beautiful lives are turned upside down by larger events beyond their control.
The trailer of the movie can now be viewed on the Yash Raj Films website, www.yashrajfilms.com
By Steven Baker