Why British Sikh’s will never forget the horrors of 1984 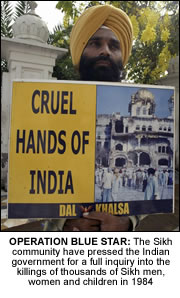 BRITISH Sikhs have vowed never to forget, never to forget those who were killed, and never forget the moment the Indian government turned on its own people.
Twenty-five years ago this month the Indian government, led by Indira Gandhi, gave the green light for Operation Blue star – an armed attack on India’s holiest shrine, The Golden Temple, in an attempt to flush out suspected Sikh militants.
Only that fateful day in 1984 wasn’t just a normal day. The temple was filled with pilgrims who had gathered for the anniversary of the death of Sikh’s 5th Guru, Arjan Dev Ji.
As soldiers closed in on the Temple, what followed in the three-day onslaught laid the foundations for one of India’s bloodiest era’s. Thousands were killed – innocent men, women and children who suddenly found themselves at the mercy of armed and unrelenting soldiers.
But it was only the start. Four months after the attack, Prime Minister Indira Gandhi who ordered the attack on the Golden Temple was assassinated by her Sikh bodyguards in retaliation for Operation Blue Star.
The country crumbled and the Sikh community were horrifically attacked by pro-Gandhi supporters.
For British Sikh’s these two events of 1984 will never be forgotten. Later this month thousands are expected to converge on London’s Hyde Park in a remembrance march for those who were brutally killed.
British Sikh Jag Singh who will travel to London said the events of that fateful year shaped the identity of the Sikh community.
“The events of 1984 created awareness around identity and faith and helped unite the Sikh community,” he told The Asian Today.
“Today, the memory of what happened and the continued injustices against Sikhs remind them that the struggle is not yet over. Too often people think that there was a siege of the Golden Temple, when in fact the whole of Punjab was put under curfew in an attempt to bring a nation to its knees.”
While many of those who will make their way to London for the march may not have witnessed or experienced first hand the pains of the tragedy, as Sikh’s they are united in the same cause.
“The Sikhs have held an annual national remembrance march and rally in London for the past 25 years,” Jag said. “A quarter of a century on, it’s a credit to the determination of Sikh resolve to never forget what happened. It’s the least we can do to give a voice to the thousands that have been silenced.”
Since the attacks human rights organisations across the world have joined the Sikh community in calling for justice for the thousands who were killed in 1984.
It’s a plea that seems to have fallen on deaf ears. While the different Indian governments of the past 25 years have expressed regret for the attack on the Golden Temple and the widespread killings of Sikh men, women and children following the assassination of Indira Gandhi, there is still unfinished business.
Many high profile political figures who were accused of orchestrating attacks on the Sikh community have never been brought to justice.
Amnesty International described the situation as a “national disgrace”.
For Jag it’s natural that answers still remain unanswered.
He says: “With all holocausts and genocides questions will remain un-answered. It is a fact that the world’s biggest democracy India, waged a war on its own people, the likes of which have not been seen anywhere in the world.
“International human rights groups are still banned from visiting or meeting with the victims and families of state oppression in Panjab. So the ‘legal’ ability to raise this at an international level is severely compromised. Hundreds of lawyers, journalists, students and union activists have been killed trying to expose the truth.”
In a bid to expose that truth the Sikh community have launched an online petition where it is hoped the fight for justice will be kept alive.
“We want to raise awareness within the worldwide community and remind people, where they have forgotten, that the victims of 1984 remain as such and still seek justice,” Jag said.
“Successive governments have failed to convict the culprits and give justice to the Sikh victims. “Thousands of widows, who lost their homes, remain in shantytowns, living amongst the people who killed their families. Yet they fight on for justice.
“We also want to give a clear message to the leaders of the developed world – to take action and to raise the injustices dealt to the Sikh nation when they trade with India. That India must abide by the laws of democracy and decency, and that the thousands who orchestrated these crimes must be subject to the rule of law.”
Sikh Remembrance March – Marking the 25th Anniversary of the 3rd Sikh Holocaust will take place at Hyde Park, London on Sunday 7th June 2009.
To sign the petition log onto: www.nov1984.org