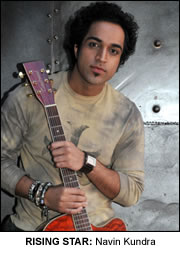 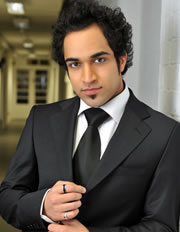 You’ve managed to get yourself heard in Bollywood! How did you get involved in the Akshay Kareena film ‘Kambakht Ishq’?
Yep…of all the films I could’ve got – that’s the title! (Laughs) This came about through Rishi Rich who was working with Anu Malik at the time. They needed a singer to vocal a song which was written in India to be filmed on Akshay Kumar. With the song being written in Hindi and English, Rishi Rich recommended me to Anu Malik. He played Anu some of my material including a song we’ve recorded together which is a collaboration with Jay Sean and they called me into the studio to record the song. I thought it was a joke at first, but then when I got to the studio – it was for real and it was a brilliant experience!
Did you get to meet the stars?
No not this time…tut tut!
Is Bollywood something you’d like to do more of in the future?
Absolutely – I’ve grown up listening to Bollywood music and I love it!
You came up with a very interesting concept for Valentines Day for your single ‘Tere Liye’. Tell us a bit about that?
Well I wanted the song to be more than just another tune that people would listen to on the radio – I wanted it to be a song which was personal to them, which they could relate to, own and gift to their loved ones to tell them how much they love them – that’s why I called it ‘Tere Liye (For You)’. So prior to the Valentine’s Day release, I offered everyone the chance to log onto my website and order a copy of the song with a unique personalised dedication to their Valentine which I would record on their copy of the song. This is something which has never been done before and the response has been phenomenal!
How many requests came in for the song?
Absolutely loads – I have been inundated with dedications for this song. In fact, it has done so well that after Valentine’s Day, I decided to open up the personalised dedication order so that it is now available for any occasion as an MP3 or CD. So if it’s someone’s birthday, anniversary or even if there’s no special occasion and you just want to tell someone how much they mean to you, you can get your dedicated copy at www.navin-online.com. Simply type in your name, the name of the person you’d like to dedicate the song to, the occasion (if any) and any message which you’d like me to say to them on your behalf – it’s as simple as that! You can be as creative as you want with it and unlike flowers or chocolates, this gift is timeless. I even recorded a dedication on the song last week which was a marriage proposal by a girl…and he said YES!
What have you got lined up for the rest of the 2009?
There’s so much happening this year – first and foremost I’ll be releasing my forthcoming single ‘Mehbooba’ which is an out and out summer dance tune! I’m currently finishing my debut album which will feature some exclusive collaborations and I hope to release it this year. I’m also going to continue touring both nationally and internationally – details of all my live dates are available on my website at www.navin-online.com. Make sure you add me on Facebook and subscribe to my YouTube channel www.youtube.com/navinonline  to be a part of the journey!
Interview By Zakia Yousaf