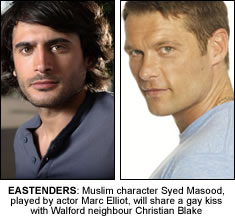 BBC bosses will embark on their most explosive storyline for a Muslim Walford resident later this month when newcomer Syed Masood embarks on a gay love affair with neighbour Christian Clarke.
The story will come as a shock to hardcore fans of the soap who have seen newcomer Syed reveal details of a girlfriend.
But in scenes set to hit our screens later this month, he falls for openly gay neighbour Christian.
“I think EastEnders would be doing the programme a disservice if they didn’t give a voice to various communities,” actor Marc Elliot who plays Syed told the BBC Asian Network.
“I think that’s really important because I think London is a very ethnically diverse multicultural place, and EastEnders has a job to reflect that in the storylines it gives people and the characters they have on board.”
Diederick Santer, the soaps executive producer said they had always tried to reflect multicultural Britain through its storylines.
“This isn’t a morale tale of right or wrong; it’s very much a human interest story where a young man struggles with the conflict between his faith and his feelings”, he said.
“To all intents and purposes, Syed’s a ‘good’ Muslim man; he doesn’t drink, smoke or engage in sex before marriage. But he struggles with his sexuality when he finds himself drawn to Christian and he believes this goes against his faith.”