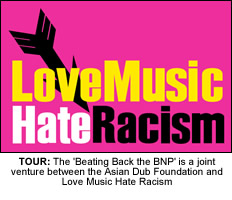 ACCLAIMED British band Asian Dub Foundation has announced a special three-date tour to counter the possible threat from the British National Party at next month’s European Elections.
The ‘Beating Back the BNP’ tour has been organised jointly with Love Music Hate Racism – a music-orientated campaign which was set up in 2002 in response to rising levels of racism and electoral successes for the BNP.
The tour, which will encompass three concerts, will begin in Derby on 23 May before moving to Manchester and Sheffield.
A statement on the group’s website said: “On June 4th there is a real chance that the right-wing racist British National Party may well win a seat in the European Parliament.”
“This cannot be allowed to happen otherwise the forces of racism and intolerance will be given a huge boost in Britain, plus also an international platform with accompanying financial resources.”
The ‘Beating Back the BNP’ tour will play at:
Derby Assembly Rooms – 23rd May
Manchester Academy: 24th May
Sheffield Plug: 25th May
For more information log onto: www.asiandubfoundation.com