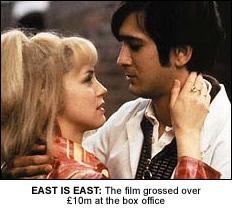 A SEQUEL to the hit Brit-Asian comedy East is East will hit the big screens next year, it has been revealed.
The 1999 smash hit told the story of the multi-cultural Khan family living in 1970s England and was adapted for the big screen from a screenplay by talented writer Ayub Khan-Din.
The film, which scooped a Best British Film Bafta, was an instant hit with audiences, raking in over £10 million worldwide.
Now BBC film chiefs have revealed a sequel, titled West is West, will hit cinemas next year, the Telegraph has reported.
Screenwriter Ayub Khan-Din will write the script while actors Om Puri and Linda Bassett will reprise their roles as George and Ella Khan.
Actor Jimi Mistry, who played Tariq in the award-winning original, will also return for the sequel.
Details of the project were unveiled at the Cannes Film Festival. Jane Wright, managing director of BBC Films, said: “People remember East Is East as an absolutely charming, funny but poignant piece and this film will be the same.
“It is another wonderful tale about living between two cultures. I can’t think of a film that has told this side of the story before.
“I just couldn’t put the script down when I read it.”
She added: “It’s a very natural follow-up but it feels completely fresh, telling a story from a different perspective.
“There hasn’t been a film which has told this side of the story before. I can’t think of anything more relevant or timely, as the idea of cultural identity has become hugely important.”
A decade later the film will centre on the youngest of the Khan family, anorak-wearing Sajid.
Now a troublesome 13-year-old his father ships him off to Pakistan in a misguided attempt to set him on the right path by making him become a ‘good Muslim’.
Shooting begins in the autumn and the film is scheduled for cinema release late next year.