One kidnapped, one shot as gang war terrorised city 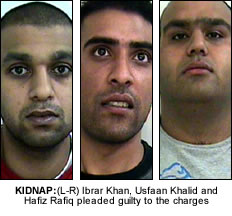 FIVE men who sparked a gang war on the streets of Preston have been told to expect jail sentences after admitting conspiracy to kidnap following an attack in the city last April.
Zahid Khan, 32, Asrar Khan, 27, and Hafiz Razaq, 24, all from Preston also pleaded guilty to assault and actual bodily harm.
They will be sentenced along with Ibrar Khan, 25 and Usfaan Khalid, 26, at Preston Crown Court on 2 July.
The court was told the men kidnapped 22-year-old Mohammed Beg after slamming a white van into his BMW saloon last April.
The gang, who were wearing balaclavas, smashed the front window of Mr Beg’s car and dragged him into the back of the white van before speeding off.
During the three-hour ordeal, Mr Beg was beaten about the head and torso. He was so badly beaten he lapsed in and out of consciousness, police 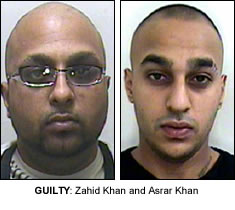 said.
He was found near a playground off Fishwick Road in Preston and rushed to hospital.
The court was told just hours after the kidnapping a man was shot in the city in a revenge attack for Mr Beg’s kidnapping.
Dilbag Singh, 26, suffered shot gun wounds to the neck as a result of the attack.
In November 2008, Kyle Parvez, 21, of Arnhem Road in Preston was found guilty of the attempted murder of Mr Singh as well as possession of a firearm with intent to commit murder.
Detective Inspector Des Coop, from the Force Major Investigation Team, who led the investigation, said the attacks were the results of a dispute over the sale of drugs in the city.
He added: “Lancashire Constabulary is putting all its efforts into tackling this type of criminality and we will do all that is necessary in order to bring these people to justice.”