Rival groups at war on Facebook over Lichfield Mosque plan 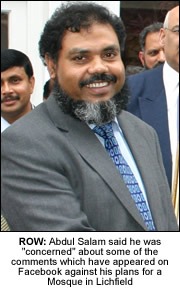 A LICHFIELD businessman has called for calm after his plans for a Mosque in Lichfield were met with widespread anger.
Restaurateur Abdul Salam said he was “concerned” about a number of “frightening” comments made on the social networking site Facebook against plans for the Mosque.
Mr Salam, who owns the popular Eastern Eye restaurant in the city, revealed plans for the mosque following consultations with Lichfield’s Muslim community.
The city does not have a mosque and Mr Salam said worshippers are either forced to hire out function halls or travel to nearby Birmingham or Burton for daily prayers.
But the creation of a Facebook group opposing the Mosque plan took a sinister turn when creators were forced to delete racist comments from members and warn others about their conduct.
The group, ‘Against Mosque being built in Lichfield’ currently has over 5,000 members and argue against the mosque because of the city’s “traditionally English” heritage.
One member said: “We are all made to believe that the multicultural society is something we should accept and want, yet who asked for this? It has been imposed on us. Even when I go abroad, people I meet make comments about how our country has been overrun by foreigners. Some areas you are pushed to see anyone who look’s traditionally English. Lets us at least have one area, Lichfield which is relatively English and untouched by foreign culture.”
Another argued: “I don’t want a bloody mosque I want a skate park or big shopping centre not a place were I won’t be able 2 go if it does get built it’s only going 2 get burnt down.”
Mr Salam, who has yet to submit the plans to Lichfield District Council, said he was “concerned” about the nature of some of the comments.
“Comments which have been left on Facebook show that we have a tremendous problem in Lichfield which we didn’t think we had,” he said. “We have been left concerned and a bit frightened.
“There is no need to hate each other – there is nothing to gain in hatred. Learning to live together will be better for all of us,” Mr Salam added.
A rival group calling for the Mosque to be built has also emerged on Facebook.
Creator Mathew Gibbon said: “We should be working towards an inclusive city that welcomes our growing Muslim community. I made this group after seeing the one arguing against having a mosque, and the hundreds of racist comments.”
Lichfield District Council leader, Councillor David Smith, said: “Lichfield district gains great strength from its cultural diversity, and welcomes people from all faiths.
“Our residents should be free to live and work peacefully in the district – in the spirit of harmony and understanding.”