Steven Baker gets intimate with the Bollywood beauty 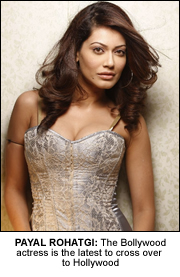 SHE started out shooting an advertisement with screen legend Amitabh Bachchan. She starred opposite Irrfan Khan in her latest film, Dil Kabaddi. And she was one of Jade Goody’s housemates on television’s Bigg Boss. Now, she is all set to become the latest Indian export to Hollywood. In a freewheeling chat, Bollywood beauty Payal Rohatgi gets intimate with Steven Baker.
In recent weeks we have seen you in two very different looks: presenting at the Filmfare Awards in Mumbai, and in some sensational shots for the latest Indian edition of men’s mag Maxim.
I wore a sari to the Filmfare Awards, one of the most auspicious occasions for the industry. I love wearing saris, and everyone around me tells me I look good wearing them- and the one that I wore at the awards (Violet Monis) is one of my favourites. Maxim was work for me and the shooting went really well. Maxim itself is a very naughty magazine, so the shoot required me wearing such clothes.
You have been paired opposite actors such as Paresh Rawal, Ritesh Deshmukh, Arbaaz Khan, Ranvir Shorey, and most recently Irrfan Khan, who has been your favourite co-star?
Well actually, all the co-stars I have worked with are my favourites. However, if I have to choose, it would be Irrfan Sir (Irrfan Khan- please do not laugh if I call him sir; I respect him and call him sir as he has more experience as an actor). We gelled very well while shooting for Dil Kabbadi because our characters required a lot of interaction.
Which actors are on your dream list?
The actors I would love to work with in the future are Shah Rukh Khan, Amitabh Bachchan (although we have already shot a commercial), Aamir Khan, Salman Khan, Abhishek Bachchan and a lot more… Even Imran Khan, Hrithik Roshan, and Ranbir Kapoor are damn good with their acting.
You appeared on Bigg Boss, the Indian version of Big Brother. How was the experience? Would you do it again?
I loved each and every moment in the show- I would call it the experience of a life time. It got me a lot of recognition, as a huge audience watches television in India. I would also say I have learnt a lot of things from the show like never trust anybody, except your family. People saw me crying and thought I was faking, but I would really like to tell them that I was genuinely crying because I was missing my family and especially my mom.
You must be one of the few actors to turn down Yash Raj Productions when they offered you Tashan. Did you predict it was going to be a flop? How do you decide which films to sign?
When Yash Raj Productions offered me a role I rejected it, as the role that they were pitching was not the kind I was willing to do. But I would definitely love to work with them in the future- and I know I will. I watched Tashan and I quite liked it.
How do you feel Bollywood is perceived in the west?
People abroad are crazy for Indian films and I think they watch our movies more than we do. They recognise everyone’s face in Bollywood- whether the actor is small or big.
Slumdog Millionaire has raised global awareness about (if not Indian cinema), India and Cinema, have you seen the film? What is your response to it?
Yes, I have seen the film and loved every bit of it. Slumdog Millionaire is a great achievement for India and it has opened the doors of Hollywood for Indian cinema. Slumdog won recognition for India in the Oscars, which is a very big achievement. I think we should be proud of the film and the country.
Finally, what’s next? What can fans look forward to from Payal Rohatgi in the future?
My fans will see me in a lot of different roles which I will start working on soon. I have a couple of big things lined up including a Hollywood Project!
Steven Baker is a UK writer who divides his time between London, Delhi, and Mumbai. Best known for his writing on the Hindi film industry, he has also appeared in 20 Bollywood films.