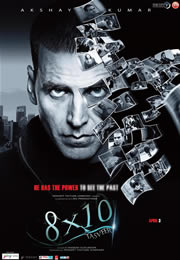 Directed by: Nagesh Kukunoor
Cast: Akshay Kumar, Ayesha Takia, Sharmila Tagore and Javed Jaffery
This is the story of Jai (Akshay Kumar), a young man in his mid thirties with a supernatural gift. He is able to delve into the past of dead people by touching any object belonging to them.
However, Jai manages to make a living even though his family and close friends are sceptical of his so called power. He manages to make a living in this land so steeped in belief of the supernatural.
Jai’s father, Jatin, feels his son should be managing the business empire created by him instead of wasting time on superstitious beliefs. This causes a rift between father and son.
Jai’s mother, Savitri cannot bear to be separated from her only son and so maintains a secret contact with Jai. Jai’s reluctant wife Sheela, supports her husband but also has a ‘real ‘job to pay the household bills.
Life goes on for everyone until Jatin is killed in a boating accident. Shocked by the incident, a heartbroken Jai grieves for his great loss. Soon, he comes across a photograph taken of the entire group of friends and family on the boat, minutes before the accident.
By touching the photo, Jai gets visions of what had happened to his father. To his horror he finds that his father was actually murdered.
Consumed by grief and curiosity, he starts investigating to find the truth. This leads to a nail biting climax as the real culprit is unveiled.
Tasveer is a psychological action thriller directed by Nagesh Kuknoor. The film is said to have been inspired by Manoj Night Shyamalan’s movie, ‘The Sixth Sense’. Ayesha Takia plays Akshay’s love interest in the film which has been shot in Cape Town and Canada.
Known for carrying out his own stunts, daredevil Akshay Kumar jumped off a cliff for one of the action scenes in Tasveer. From a height of approximately 160ft, he dived deep into freezing water which registered -20 degrees centigrade.
The thriller is all geared for an April UK cinema release.