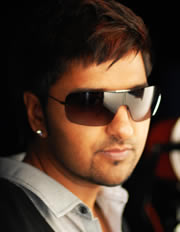 Exceptional is the singular word that can only describe Panjabi By Natures new album Homegrown – an album which splashes a dash of the iconic producers signature dance floor beats and brushes smooth Desi numbers to create an artistic masterpiece juxtaposed by a creative musical genius.
It comes as no surprise Homegrown is riding high in a number of charts on an international spectrum and is receiving rave reviews from fans and fellow musicians alike. With the likes of Lehmber Hussainpuri, Miss Pooja, Apache Indian and Charanjit Channi featuring on the album, Homegrown captures the crème de la crème of Bhangra Icons and fits them into one album that can be played and enjoyed all the way through.
Wolverhampton raised PBN took time out of his schedule to speak to Sunny Sahota on his new album and his plans for the future.
Well PBN this is a fantastic album, before I delve into Homegrown, tell us first where did it all begin?
Well I have had a love for music since childhood, but it wasn’t until my teens and Uni days that was I able to turn this into a profession. I was lucky enough to have the opportunity of working with a number of mainstream music producers who were currently working with the likes of Beverley Knight. This is where PBN began… In the recording studio. Once I had produced material which I had belief in I was a regular on the Bhangra circuit.
You have 3 albums and 4 collaborations under your belt and Homegrown is your 4th solo album. What makes Homegrown different from the rest of your albums?
Well I feel this album showcases my growth both personally and musically which hopefully you guys will be able to hear. I wanted to stick to my signature style to cater to my fans with dance floor hits but I wanted to mix this in with slower songs to make the album more rounded. Homegrown is an album I feel you can hear whatever you mood, happy, sad or just chilling which gives Homegrown that element of versatility which is great.
Your album features a number of Bhangra icons – tell us who was the best to work with?
I really can’t say who was the best artist to work with as they were all so different in what they brought to the songs. I know you probably hear this a lot but I genuinely enjoyed working with all the artists on the album as they are all music icons.
Oh come on if you had to choose who would it be?
Ok it will probably be Miss Pooja on the song Aashiq. I worked with Miss Pooja on this track way back before her collaborations with a number of stars which she has worked with recently. But I feel real happy that I was one of the first to feature Miss Pooja as she is an exceptional artist with an exceptional voice which I am confident is reflected in the song Aashiq – as it speaks for itself. The song is proving to be a massive hit and I am really happy with the response that it is getting.
PBN, in the song ‘Sohni Lagdi’ you’re actually singing? How did that come about? This is your first song with you singing, why now?
Yeah it is my vocals in Sohni Lagdi. It came about by me just doing something a bit different in the studio and experimenting which goes back to my previous answer about how Homegrown reflects my maturity in the Bhangra industry and my growth musically. I sang on the track and played it to out to a few friends and close media relations and asked them what they thought of the vocals on the track. I never told them it was me as I wanted them to comment constructively on it. Thankfully they all were impressed so I decided to keep them on. I am really happy with the reactions that everyone gave me when they knew they were my vocals on the track as the comments were really positive. I am going to carry on with this and sing on some future tracks for sure.
Personally I thing ‘Sohni Lagdi’ is the best track on the album? Will this be your next release off the album?
Thank you! You’re not the only one that thinks that. Sohni Lagdi is receiving a great response and a lot of my fans have been requesting for me to have a video for this. And yes Sohni Lagdi will be the next release from the album and I am in talks now about the video so watch this space!
Will you be touring soon?
Yeah I have a tour in Australia coming up which I am really looking forward to – I have many fans out there so I wanted to go out their and give them a show and promote my album. I am also due to be travelling out to Mumbai and Canada in the coming months.
So what’s next for PBN for the rest of the year?
I have a lot on this year. Firstly I am busy promoting Homegrown as well as performing up and down the country. I am also in the process of putting material together for my next album too. I have also got an exclusive collaboration coming up but I don’t want to give too much away as it’s going to be a huge surprise. 2009 will be the year of Collaboration for PBN.