Home Interviews ‘It takes time for an actor to grow’ 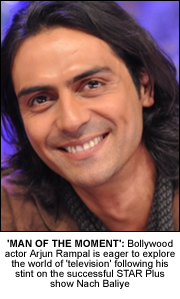 FRESH from his stint on the STAR Plus show Nach Baliye, life is looking rosy for actor Arjun Rampal.
The former model has become one of the industry’s most versatile actors. Despite considering himself an ‘outsider’ in Bollywood, he’s done well to make a name for himself even if it did take critics six years to warm to him. India’s hugely successful dancing show Nach Baliye has allowed Arjun to carve out a career in television with the actor eager to take every opportunity that comes his way. We caught up with Arjun to find out what the future holds for the ‘man of the moment’…
Arjun success eluded you until Om Shanti Om. How do you feel now?
It feels great as we work to earn the appreciation and love from our audiences for our good work. We want them to see our films and approve of our work. All of us have our time and moment when we get an opportunity to prove our mettle. It’s just that what you do with your time is important.
Do you think luck plays a major factor?
I don’t think it is the luck factor. When you are an outsider in the industry with no relatives to bank on it takes time to establish yourself, to understand the work and the medium. It takes time for an actor to grow and it’s been just six years for me in the industry.
So what brought you to television for Nach Baliye?
I think it’s a great medium to interact with the huge wide audience across India and abroad.
I too want to be more approachable and see the medium which is so big from close quarters and understand it. Also I have my production company which is stepping into TV production so I want to understand what the TV media is all about. Also it is a great fun show which doesn’t require too much of time so I did not have to compromise with my shooting and films because that is my first job. As long as I can keep the balance it is fine.
Why Nach Baliye?
It is a show that I have watched and it has entertained me. Secondly, because it has consistently been successful and it just proves the talent and the strength of the team behind it.
They indulge in good policies and good programming and always try to make it more exciting. It’s easy to make a successful first season of a show but to keep it consistently growing and sustaining the success is a very difficult task. Being successful means being the numero uno and Nach Baliye is the number one show in the category of such shows.
As I said earlier that being number one is easier than sustaining the position and it feels great to be a part of such a show.
Had you received offers to do reality shows earlier?
Yes I was offered reality shows earlier too. I got an offer to participate in the Bigg Boss Season 1 but I refused.
Of late many Bollywood biggies have failed on TV. Do you think you will succeed?
I can’t say if this is the right time for me on TV because you might go wrong even if you calculate all your moves. But I have come to TV with an intention to entertain the audience whole-heartedly. I have not mulled over the success or failure of this move. I feel whenever I have done something to prove to others I have failed but tasted success when I have worked to prove it to myself. I just feel one should put in his 100 percent when doing something.
Is it true that Farah Khan convinced you to judge the show?
Farah did not convince me but told me that they would like to have me on the show. I felt Star was a little scared by the idea of having me on the show as to what I would do on the show. Farah called me up and said that we will have fun together on the show and to give it a thought. I told her that I don’t have to think about it as I thoroughly enjoy the show myself so let me just work on my dates. When I met the Star team I was fully convinced that the quality of the show is good and they are going to promote it well.
Aside from acting, you’re quite the dancer too. How do you rate yourself as a dancer?
I am pretty ok on the dance floor and I think I am as good as my choreographer. I like to jive sometimes.
Who is your favourite dancer from the industry?
I think Hrithik Roshan is definitely by far the best dancer in the industry and even at the international level I rate him very high. Other than him I would say Justin Timberlake is another good dancer. Amongst the females, Aishwarya Rai and Madhuri Dixit are fabulous dancers.
What do you watch on TV?
I usually watch a lot of Discovery channel. I have watched a bit of Bigg Boss and Nach Baliye too.
Tell us about your shows that you are producing for television?
Well it would be related to entertainment and there will be a reality and another fiction show. It is almost finalised but I still can’t talk about it!